Andrea Horwath's days are quite full, as leader of Ontario's Official Opposition, so to unwind she likes to bake -- though her version of downtime doesn't sound especially relaxing.

The NDP leader recently had a late-night urge to whip up a batch of biscuits, but instead of turning out soft and flaky, they more closely resembled hockey pucks. Frustrated, she made a second attempt into the wee hours, but they still were not quite right.

"The very next morning I got up and made one more attempt and finally nailed it," she said in a recent interview. "I just like the challenge...I get engrossed in cooking and baking and it just helps to kind of take me away."

Horwath, 59, exudes determination in all aspects of her life, friends and colleagues say.

She is days away from contesting her fourth -- and widely expected to be last -- election as NDP leader. With her party trailing in the polls, her possible final attempt at becoming premier may not turn out how she had hoped, but it won't be for lack of trying.

"If you look at her history of the years in politics, she's had a lot of ups and downs, and she's had a lot of people work really hard to take her down, and she still holds her chin up high," says caucus member and close friend Monique Taylor.

"She knows what she's after and she's determined to get it."

Horwath is the second of four children and grew up in Stoney Creek, the daughter of an autoworker. In school, she says she was studious and "very serious," becoming Grade 8 valedictorian.

"My parents were worried because I would rather be reading, like sitting around either in my room or on the couch reading or studying and not socializing enough, and they thought that that was a bit of a problem," Horwath says.

"Halfway through high school I got a boyfriend and things started going in a little bit different of a direction, but I still did well enough to go to university, to have the grades necessary to be accepted at at McMaster University."

Her first job after graduating from labour studies at McMaster was at a workers' education centre in Hamilton, established to help people with literacy and numeracy. As part of the job, Horwath had to learn quickly about tapping into her inner extrovert.

"Here's me, I don't know maybe in my early 20s, maybe 23 or so, and I enter this union hall with all of these big, burly steelworkers to talk to them about ESL and literacy," she says. "It was pretty daunting." 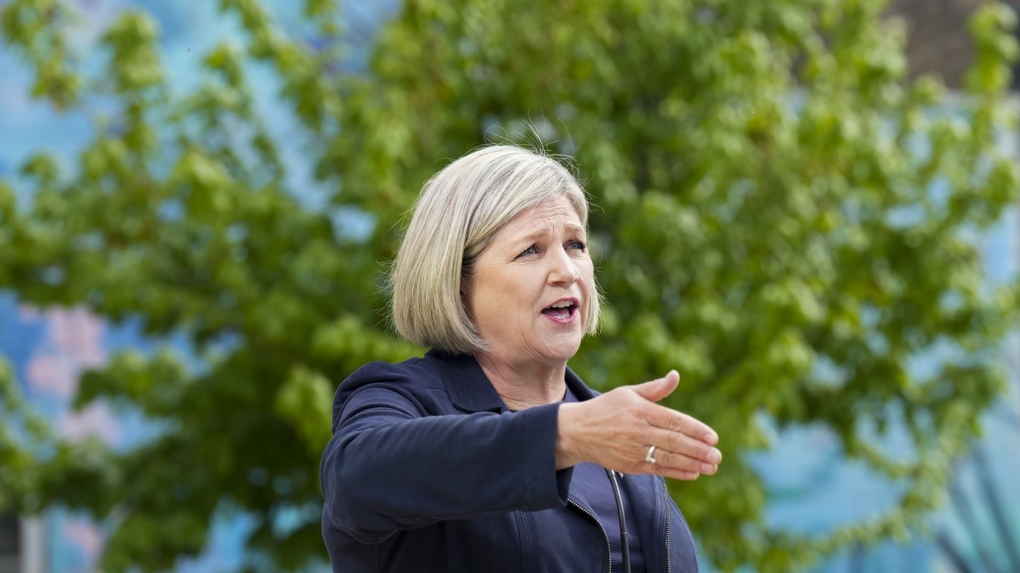 Horwath says she still gets nervous sometimes when public speaking, but the 10 years she spent waitressing helped to get her out of her shell.

The way Taylor tells it, Horwath has since fully embraced her social side.

"(It's) just really to be out and having fun as women, and she absorbs every single moment of it."

Horwath worked at a co-op housing company after the education centre, and when the province started downloading services onto municipalities, she and her housing activist colleagues decided something had to be done.

"We got together one night and decided somebody's going to have to run for council and I was the one that got the job," she says.

Horwath was elected to Hamilton city council in 1997 and served three terms, before being elected to the Ontario legislature in a byelection in 2004. She has been leader of the party since 2009, through three general elections.

Some observers had expected Horwath to step down if her party lost a third election, but in 2018, partly assisted by the collapse of the Liberal vote, the NDP nearly doubled its seat count and became the Official Opposition.

Peter Graefe, an associate political science professor at McMaster University, said Horwath likely would have stepped down four years ago if the NDP had remained the third party, and predicted she probably will this time if they don't form government.

"The idea that she was leader of the Official Opposition, and might have had a shot at the premier's chair this time...is what convinced her to continue," he said.

"(But) it's not like after 12 years, she's suddenly going to find a new way to connect with Ontarians."

Horwath often presents as likeable, but there is a narrative that she has become more negative, Graefe said, which may come down to her being the only female leader in the field.

"There's a lot of gendered, I think, stereotypes there, right, where women if they criticize are suddenly seen as negative and pay a price in a way that men likely wouldn't," he said.

"That's one of the challenges she's had this time is that her role made her be also less a politician of proposition and more one of opposition."

Other challenges Horwath has faced this time include voices from two sides in the party questioning her leadership.

Paul Miller, a longtime New Democrat representing Hamilton-East Stoney Creek, was kicked out of the party and accuses them of creating an allegation as an excuse to get rid of "the old guys" and change the face of the party.

Members of the NDP's Black caucus were also upset after the party let Kevin Yarde, who won Brampton North in 2018, lose a nomination battle to an upstart challenger.

"That's the 'tricky' thing about committing to leadership rooted in anti-oppression and anti-racism," Jill Andrew tweeted at the time. "You've actually got to commit to the work and to the ....PEOPLE...... who you ask to believe in you and be on the journey with you."

Dan O'Brien, Horwath's former deputy chief of staff, said he doesn't think those issues will move the needle. He said his experience with Horwath as a leader is that she is warm, social and "a lot of fun."

"She definitely likes to work the room in that kind of personal way, like not the policy kind of way," he said. "That was her instinct. She just wanted to make sure people were comfortable and saying hi, and getting to know them and having a good time."

Horwath was clearly having a great time being back on the campaign trail Wednesday, her first event in person after catching COVID-19 last week.

"I'm on fire, guys," she shouted at the end of her morning announcement. "I think a couple of days in isolation have made me get re-energized."

With the NDP polling in third,she'll need to draw on that energy for an uphill battle in the last week of the campaign, something Taylor said Horwath has in spades.

Taylor recalled when their group of friends went ziplining, and only Horwath was keen on it, even though she ended up with some cuts and scratches.

"She's always ready for that next challenge and she takes them on with pride," she says.

"She always ends up with an accident and a bump, but it doesn't stop her...She just shakes it off, like, 'Oh well,' and keeps going."

This report by The Canadian Press was first published May 26, 2022.

A day after Russian President Vladimir Putin declared victory in seizing an eastern Ukraine province essential to his wartime aims, a city in the path of Moscow's offensive came under sustained bombardment, its mayor said Tuesday.

Saving for retirement is becoming out of reach for young Canadians

A new U.S. study shows that in high-trust neighbourhoods, those with a larger dog population had robbery rates that were almost two-thirds lower and murder rates that were cut in half.

Climate change protesters targeted a copy of Leonardo da Vinci's 'The Last Supper' at London's Royal Academy of Arts Tuesday, gluing themselves to the painting's frame and spray-painting 'No New Oil' next to it.