TORONTO -- After what should have been a major sigh of relief, a Newmarket, Ont. resident is instead left feeling outraged after his 80-year-old grandma was forced to wait outdoors in freezing temperatures for her COVID-19 vaccination appointment on Thursday.

Mitchell Greenberg brought his grandmother and her caregiver to the vaccination centre at Ray Twinney Recreation Complex in Newmarket this afternoon for her 1 p.m. appointment.

Greenberg said his mother booked an appointment for his grandmother yesterday and that his family is anxious to get the vulnerable senior vaccinated as she is currently battling cancer.

Health officials told Greenberg’s grandmother to arrive 15 minutes early to receive her shot but Greenberg decided to bring her an hour early “just to be safe.”

When they arrived Greenberg said he was shocked to see a massive line forming outside of the centre.

“We were aghast to see quite literally this interminable line of elderly people, like this endless line of people in wheelchairs and canes and I felt like this can’t possibly be right,” Greenberg told CP24.com Thursday afternoon.

As of Monday, seniors born on or before Dec. 31,1941 were allowed to start booking an appointment for their first dose of the vaccine in York Region.

The vaccination centre in Newmarket is currently only inoculating those 80 and older, staff and caregivers working in long-term care home and retirement settings and high-priority health-care workers by appointment only.

In a statement provided to CP24 on Thursday, a spokesperson for Southlake Regional Health Centre apologized for the lines and said that they resulted from “some system and process issues” as the centre was opened this morning.

The spokesperson said that the scheduling system will be modified going forward and additional staff and security will be brought in to help “help move people through more quickly.”

“We recognize that this is a long line for seniors to wait in and we apologize for that. We appreciate everyone’s patience as we work through this,” the spokesperson said.Greenberg said that there appeared to be more than 100 seniors waiting outside in the frigid temperatures to get their first dose.

Unlike yesterday’s unseasonably warm temperatures in the Greater Toronto Area, Thursday’s high was -3 C in Newmarket but felt like -15 with windchill.

“I saw an elderly man waiting at the back of the line literally, he didn’t have a hat on, so he took his hands and was rubbing his ears to stay warm,” he said.

“There’s no way that anyone can be reasonably expected to know that they’d be waiting outside for hours, so a lot of people weren’t adequately prepared for the cold.”

Greenberg said he tried to find a staff member outside to inquire about the wait time but that no one appeared to be coordinating the line.

“The only person who I could speak to was a security guard who told me that someone would have to wait in line, whether it's me or my grandmother, in order for her to actually get the vaccine, and people in line were telling me that they were over an hour behind schedule,” he said.

He also noted that no one appeared to be physically distancing outside.

“I don't think that's their fault or anything but there wasn’t staff at the vaccination clinic enforcing social distancing guidelines.”

When Greenberg was able to get a peek inside the centre he said it was “really chaotic” and that people were crammed together like “sardines in a tin can.”

He said there was a designated “warming area” indoors where people could wait their turn but, much like outside, people didn’t appear to be standing six metres apart.

After waiting outdoors for 45 minutes, Greenberg said his grandmother felt “degraded” and decided to take her home.

“There’s not a chance I was going to let her wait outside. If she wanted to continue her attempt to make her appointment I guess we were going to have her wait in the car… because the inside warming centre was not socially distancing.” 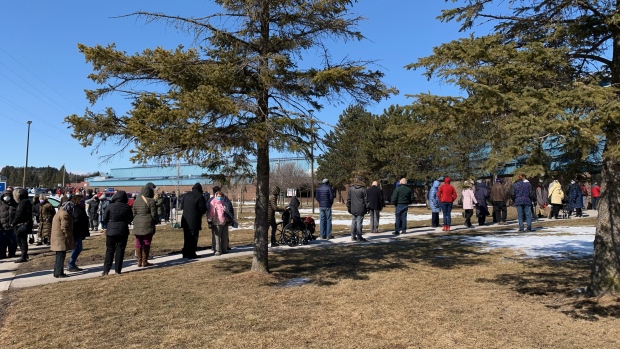 “She’s immunocompromised, she has cancer, she’s 80, I didn’t want her waiting inside close to so many people,” he said.

Even if Greenberg decided to let his grandmother wait in the car while he saved her spot in line, he said she didn’t feel comfortable going inside the centre.

“She said it’s so risky. She's like if I don't have COVID now I’ll 100 per cent get it if I go in there,” Greenberg recounted.

He said that he’ll try to book another appointment for his grandmother soon but that he would like to see “accountability from the province and whoever screwed up on the scheduling.”

“That is just like gross negligence. I’d like to see some competence in scheduling the vaccination appointments for 80-year-olds, like come on. To have people wait outside in the cold by themselves when they’re over 80, that is outrageous.”

Newmarket is not the only municipality facing concerns over lineups at vaccination sites in York Region. Earlier this week, seniors in Richmond Hill also reported their frustrations with waiting outdoors in chilly temperatures after booking an appointment.