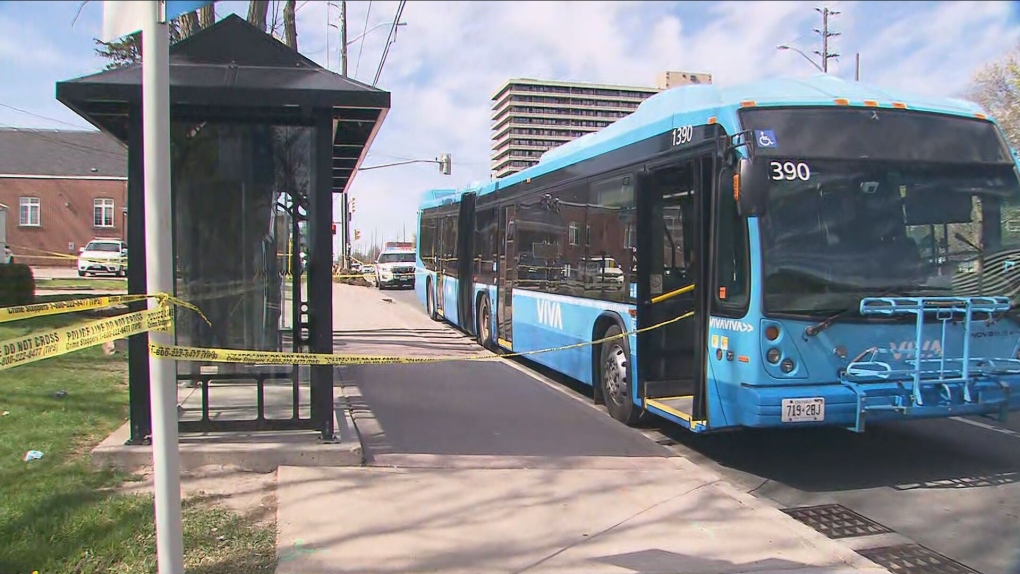 Police tape is shown beside a York Region Transit bus following a stabbing on Monday afternoon.

A teenage boy has been arrested, and a second suspect remains outstanding after a stabbing at a bus stop in Thornhill earlier this month.

The incident happened on May 9, just after 1 p.m., in the area of Royal Orchard Boulevard and Yonge Street.

York Regional Police said a male got off a Viva bus and stabbed another male who was waiting at the bus stop multiple times.

As it was happening, a third male who was also at the bus shelter proceeded to film the incident.

Police said the two male suspects then fled the scene on foot.

When officers arrived, they located the victim suffering from stab wounds. He was transported to the hospital with serious but non-life-threatening injuries.

On Thursday, police announced that one of the suspects, a 16-year-old Markham boy, was arrested and charged with attempted to commit murder, possession of a weapon, aggravated assault and two counts of breach of probation.

Police said they continue to look for the second suspect, who is described as male, tall with a thin build, dark hair, and clean-shaven. He was wearing a red backpack, dark jacket and pants, a red-and-white multi-coloured hoodie and sunglasses.

They are asking anyone with information to contact the York Regional Police #2 District Criminal Investigations Bureau at 1-866-876-5423 ext. 7241 or Crime Stoppers anonymously at 1-800-222-TIPS.