David Hove is back in business.

The 10-year-old Toronto boy was once again sitting at the side of his street selling scones Wednesday afternoon after his stand - including his table, cooler and bottle of water - was stolen over the weekend.

The theft happened when the boy went inside his home for a bathroom break. Fortunately, he had the forethought to take his cashbox inside with him.

Security video from Hove’s home shows a man in a white SUV driving up, stopping his vehicle, opening the trunk, and loading Hove’s stand into the back. All that was left behind was a paper sign advertising scones for sale.

After CTV News Toronto aired his story on Monday, offers of support began to pour in from across Canada.

Someone in the neighbourhood donated a new table and cooler, and people began coming by to buy more scones, which were baked by his older sister.

Hove told CTV News Toronto he was saving up to buy an Xbox gaming system and this afternoon a representative of Stadia Glass and Door stopped by to deliver one - much to the 10-year-old’s surprise.

“I'm about to cry,” exclaimed Hove, saying the gift made him feel “so good”. 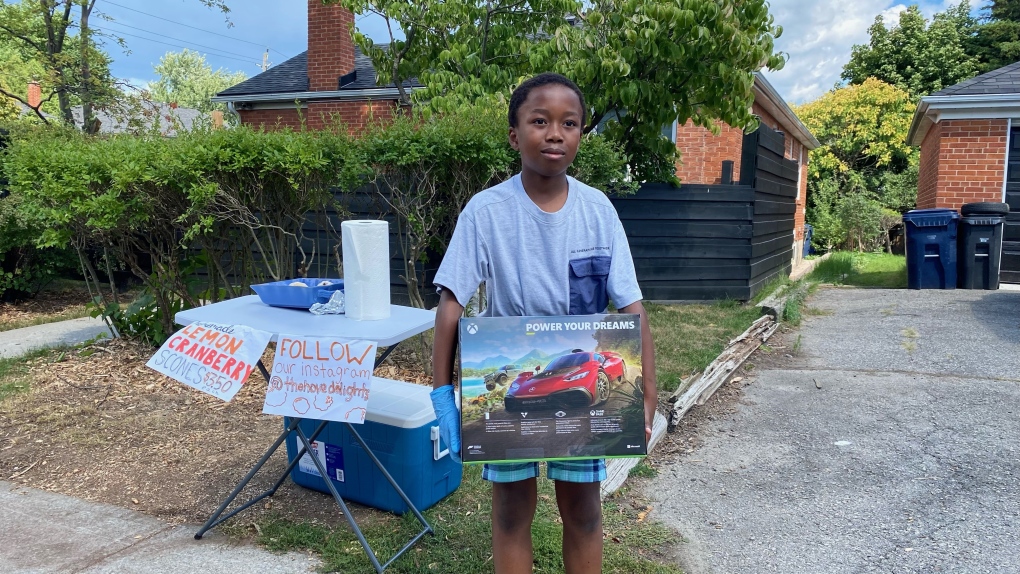 David Hove is seen with an Xbox, which was gifted to him after someone stole his scone stand.

The outpouring of support has meant a lot to the young entrepreneur as well as his father, who is also named David. They both say they have been overwhelmed by the kindness of strangers.

“That shows him that there is more good than bad in the world," Hove's father said. “And that’s a positive thing.”

Hove is continuing his budding baked goods business and when asked what he was saving up for now, he replied with a smile: “A car”.