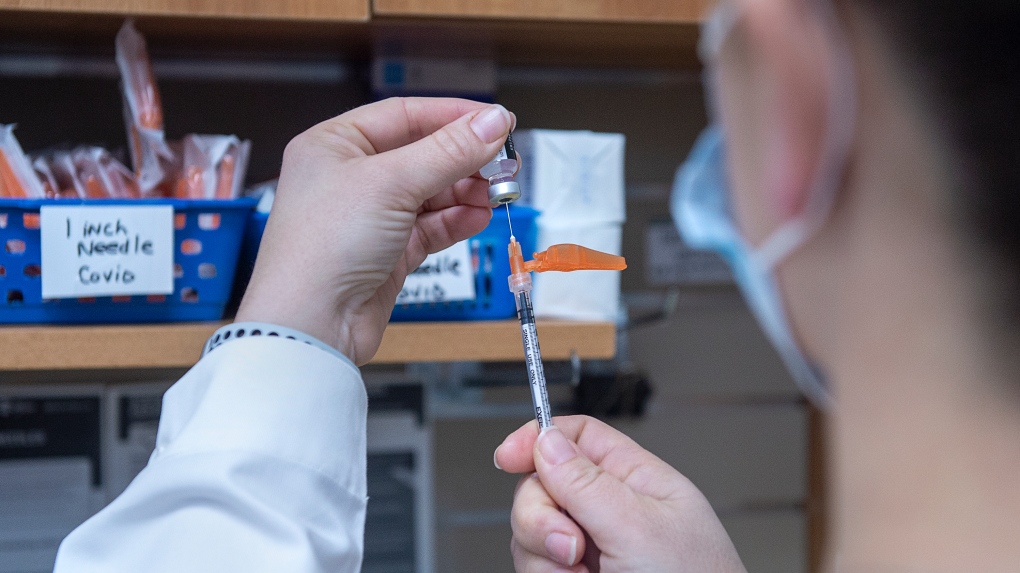 A pharmacist prepares the Pfizer-BioNTech COVID-19 mRNA vaccine at a pharmacy prototype clinic in Halifax on Tuesday, March 9, 2021. The province's COVID-19 vaccine age-based rollout continues and is being expanded to include other sectors of the population including healthcare workers. The CANADIAN PRESS/Andrew Vaughan

TORONTO -- Officials in York Region say they will begin taking appointments to give COVID-19 vaccines to those between the ages of 75 and 79, starting Thursday.

The move comes a day after York Region Medical Officer Of Health Dr. Karim Kurji told CP24 that the region would be making the move “very soon” following a swift vaccination effort for those 80 and older.

Kurji said York Region has reached a point where they are ready to start vaccinating younger seniors because they got going a little bit earlier than other areas like Toronto, which only opened its mass vaccination centres today.

“So you will remember that we went out the door, as it were, two weeks earlier. So we have almost kind of exhausted the over-80 population in the sense that the bookings are really kind of you know going down with that particular group,” Kurji told CP24 Tuesday. “Of course there must be some folks that are hard to reach and we're working on those folks with mobile options, etc. So we don't want our clinics to be empty, as it were. We want to continue putting vaccines into people's arms.”

He also said York Region had not seen good uptake in some of the high risk priority groups that were part of Phase 1, meaning the region needs to move onto the next group in order to keep the vaccination clinics full.

How can you book a COVID-19 vaccine appointment in York Region?

Starting Thursday at 8:30 a.m., those who are eligible (born in 1946 and earlier) can go online to book an appointment at york.ca/covid19vaccine.

Residents can book appointments at one of seven vaccination sites.

In a news release Wednesday, York Region said that anyone who has become eligible so far can still book an appointment if they haven't had one.

The region said it will soon start rolling out mobile vaccinations for homebound residents. A drive-through site at Canada's Wonderland is also scheduled to begin vaccinating those with appointments starting the week of March 29.