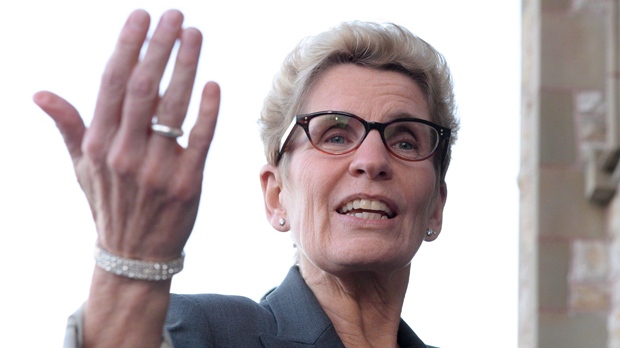 Ontario Premier Kathleen Wynne speaks to reporters as she arrives at the First Ministers meeting at the Canadian Museum of Nature in Ottawa on Monday, Nov. 23, 2015. (Sean Kilpatrick/THE CANADIAN PRESS)

TORONTO -- Premier Kathleen Wynne won't guarantee that the Liberal climate change action plan will be released before the Ontario legislature rises for the summer on June 9.

The Liberals have been pressed for details after a published report said they planned to phase out the use of natural gas for home heating as part of the plan to reduce greenhouse gas emissions.

Asked today if the action plan would be made public before the summer break, Wynne would say only that the environment minister would be making an announcement "very soon."

New Democrat environment critic Peter Tabuns says the Liberals "owe it to people to come forward very quickly" with their plan now that they've raised doubt about the future of natural gas in the province.

Tabuns says it doesn't make sense to him that the action plan wouldn't be released before the legislature's summer recess.

Progressive Conservative leader Patrick Brown says the Liberals should quickly offer some clarity on their plans about the future of natural gas in the province.

But Wynne says the opposition parties are anxious for details because "they want to launch their critiques" of the climate change plan as soon as possible.

"The opposition doesn't agree with what we're doing, but the opposition also has no plan, and so I'm going to take with a slight grain of salt any critique that I get from the opposition on this file," she said.

"We're going to continue to move ahead because in the global context, we're taking a leadership role, and it's the responsible thing to do."

Glen Murray, the province's environment and climate change minister, repeatedly told the legislature last week that the province will not ban the use of natural gas for home heating and would not be taking people's gas furnaces away from them.