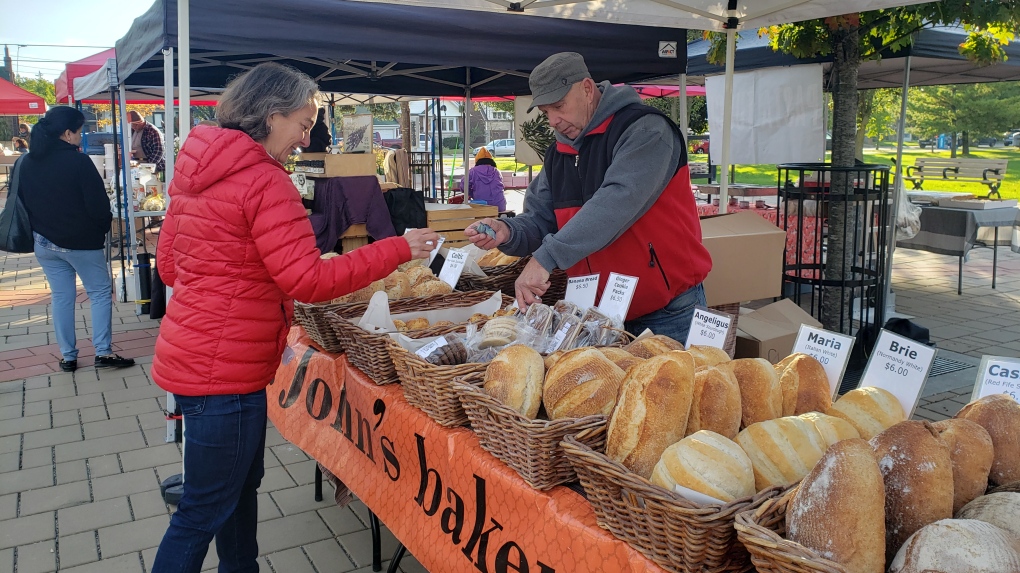 As Canada’s federal party leaders pack their final campaign days with large rallies and media availabilities, local candidates in Toronto are walking the streets, hoping residents will find a few moments to answer their doors and talk with them.

There is less than one week left before Torontonians head to the polls. With that in mind, candidates are stepping up their game, working long hours to ensure they reach as many people as possible and convince them to vote.

For the Toronto-Danforth Liberal Party candidate, that means starting every weekday around 7:30 a.m. at a transit stop in the neighbourhood.

“(It) gives me a chance to meet people because as much as we talk about knocking on doors, not everyone is home when we get there,” Julie Dabrusin said.

On a relatively quiet post-Thanksgiving Tuesday morning, Dabrusin stood outside Chester Station wearing jeans and a bright red coat, shaking hands and handing out pamphlets. Despite the cold weather, a large number of people stopped by to greet her briefly before jumping on the subway.

The only words that pass between them were a simple “hello,” “nice to meet you,” or “I’ve already voted.” 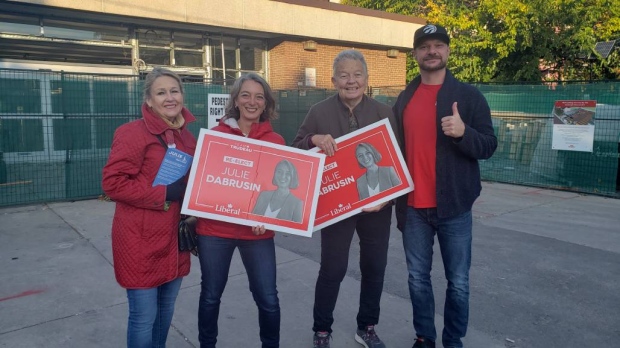 Three volunteers are also at Chester Station covering every possible entrance and passing out more reading material. Dabrusin’s campaign manager says they go through pamphlets “in the thousands” every day.

After a quick bite to eat and the odd special event, Dabrusin said she spends most of the day canvassing the neighbourhood and knocking on doors. Her campaign manager said they have visited every single home in the riding, often more than once.

“There was one door just last week where I think it may have been the third time that I’ve talked to that person at their door,” she said.

Meanwhile, Andrew Cash, the New Democratic Party candidate for Davenport, said that his day starts around 10 a.m. at his campaign office.

“We will be trying to knock on doors by 10:30 latest,” he said. “I get home to my house probably around nine o’clock. It’s mostly door knocking the whole time.”

Canvassing is ‘the most important thing’

Armed with a small group of volunteers and a lengthy list of residents in the neighbourhood, Cash sped through the streets on Tuesday—knocking on one door after the other.

He said he walks anywhere from 10 to 15 kilometres a day.

“The great thing about this is you can sort of have license to knock on people’s doors and have political conversations with people you don’t know. It’s kind of amazing,” he said. 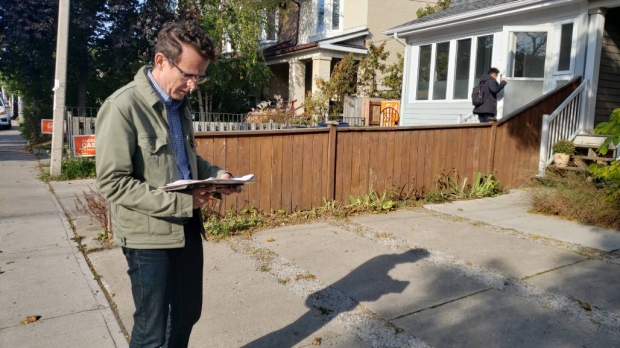 It’s a meticulous process. Each volunteer is tasked with not only introducing residents to the candidate and telling them a bit about the NDP platform, but also confirming that they have spoken with every potential voter in the home.

“For the most part, you are just talking to your neighbours and very, very normal people going about their lives,” Emma Davey, a volunteer with the Cash campaign, said.

For other candidates, the last few days of the campaign is all about visibility.

Annamie Paul, the Green Party candidate for Toronto-Centre, starts her day answering about an hour and a half worth of emails. While she says there is “no typical day” in the campaign, she said that she goes to meet-and-greets and coffee gatherings in the community in addition to the canvassing.

When she walks around the neighbourhood, she wears a harness with two hollow metal rods that holds up a round sign reading “I am your candidate” on one side and a photograph of her face on the other.

“I spend a lot of time just walking the streets, just shaking hands and handing out materials,” Paul said. “We have seven (harnesses). It’s made a huge difference. A challenge you have not as an incumbent is visibility and name recognition and this is walking advertising and it also makes you very approachable.”

“It’s nice. People come up to you and you can see it from two blocks away.” 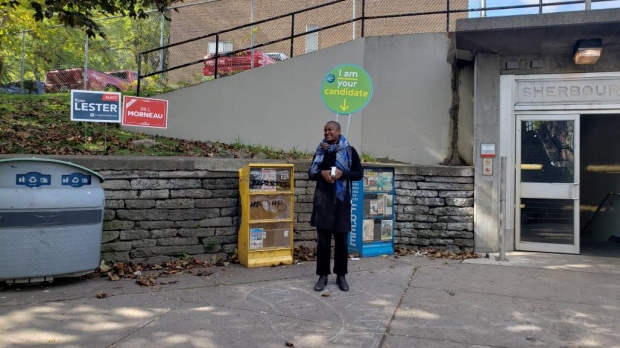 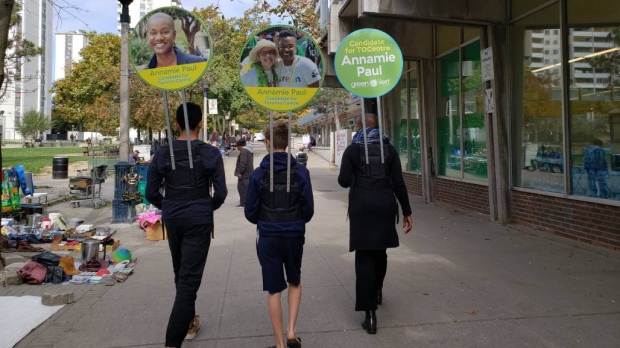 As Paul and three volunteers wander the street earlier this week, people can’t help but stare. Residents waiting at transit stops and walking along the sidewalk seem to be gravitated towards them and willing to listen to what they are saying—if anything out of sheer curiosity. However, Paul said that the more people she speaks with, the more she is convinced that her message is resonating.

“Most of the resistance is about strategic voting. It’s basically heart versus head,” she said. “I would say less than 5 per cent of the people I speak with said ‘I just heard your platform, I could never vote for you.’”

For the next week, each candidate’s goal is to reach as many people as possible and ensure them that their vote, and voice, will make a difference.

Dabrusin, who is the incumbent in her riding, said that her philosophy has always been to door knock in between elections as well—something she says gives people an opportunity to contribute to federal issues.

“A lot of the issues though are very local. My biggest issue has always been making sure we are investing in the City of Toronto. That is something people can see,” she said. “When you look at the arts financing pieces, working with our digital giants … we have a large creative industry in this area and that’s something that people here have pushed for.”

“I hope that I get the message across that people’s voices matter, that all the conversations we have impacts policy and that’s what the role of a local MP has.” 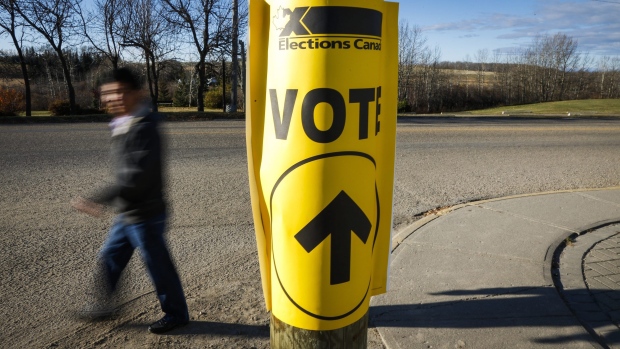 Paul joined the Green Party this year and is a member of its shadow cabinet. She said that while many federal elections are overarching, people can feel the effects climate change and affordable housing have in their everyday lives.

“When it’s hot in a downtown riding, where there are extreme heat days and so much concrete, you feel it more,” she said. “And they (voters) are generous enough with their bandwidth, let’s say, to be concerned about the climate emergency even when there are a lot of local concern as well.”

One of the volunteers with Paul’s campaign, who is also a Green candidate in York-Centre, said that she has felt hopeful walking away from a few homes, knowing that the residents may consider voting for her party.

“People seem very curious and open this time round, which is a very wonderful thing,” Rebecca Wood said.

In Davenport, Cash—who was the riding’s MP between 2012 and 2015—said that the issues he hears about the most are transit and affordable housing, although when he does reach people at the doors, he talks mostly about his party’s pharmacare, which he says is “going to directly impact people here in a really good way.”

“I think if you’re a federal party and you can’t connect your platform with the people you represent, you have a problem with your platform.”

Canadians head to the polls on Oct. 21.

Note: CTV News Toronto made attempts to reach out to the Conservative Party in an effort to speak with a local candidate, but received no response.