'What if it was me?': Teen describes bullying at school where 14-year-old was killed

As the community around Sir Winston Churchill Secondary School in Hamilton mourns the murder of 14-year-old Devan Selvey, another family is convinced his tragic death could have been prevented.

The mother, who did not want to be identified, said that her son faced years of abuse, mainly at the hands of the teens now facing first-degree murder charges.

Shifting nervously in his chair at the family’s dining room table, the teen told CTV News Toronto that he couldn’t stop replaying different scenarios in his head after hearing about Selvey’s death on Monday.

“What if I went there this time, and then these guys hurt me and then this kid’s still alive,” he said. “That’s the first I thing that went through my head.”

His mother showed CTV News Toronto photographs of her son badly bruised and burned. She alleges that these injuries were caused by severe cases of bullying. 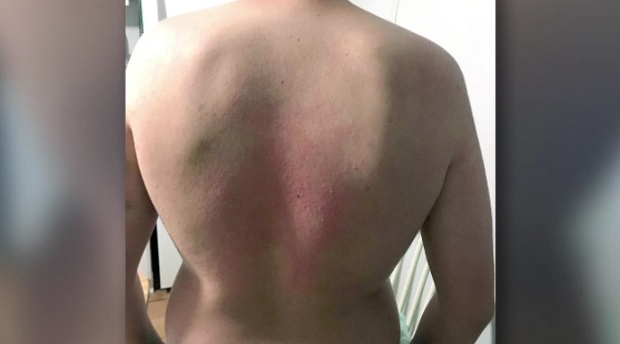 A photograph provided by family shows a red welt on a teen's back, allegedly caused by severe bullying at a Hamilton school. (Submitted by family)

After the fatal incident on Monday, the mother said she wanted to go public with the details of her son’s bullying experience. She said she feels let down by the education system.

“We made police reports. We came to the office. I’ve cried to the principal and nothing was done,” she said. “I want to know why because this could have been prevented.”

At a news conference Wednesday afternoon outside Hamilton police headquarters, Sgt. Steve Bereziuk said that investigators are looking into bullying as a factor in the investigation into Selvey’s death.

“We are going to continue to probe the bullying concerns. And we’ll work through it.”

Investigators will also be getting help from the Hamilton Wentworth District School Board, who have confirmed that incidents of bullying, as it pertains to Selvey, had been reported to the school administration.

“We will be providing all of this information to police as part of their investigation,” Manny Figueirdo, director of the school board, said.

"Our hearts are broken..." A statement from @mannyhwdsb about today's tragic loss of life @Churchill_HWDSB pic.twitter.com/40fcqHGmlw

Meanwhile, the mother of the other bullying victim says she feels her previous complaints have been ignored. She also said she was forced to pull her son out of the school because of the abuse.

“My son told us numerous times that he feels that this was going to happen to him. I even told the school, ‘I think they're going to kill my son.’ I even told the police and they never got back to me.”

Her son says his complaints to school officials were laughed off. In at least one case, he was suspended for a few days for being involved in an altercation with the alleged bullies; something he says only emboldened his tormenters.

“That’s what those kids’ strengths were, that they could keep doing it and keep doing it, and nothing was going to stop them,” the teen said. “And look what happened. I left the school and they found a new target.”

“Now all I can’t stop thinking about is ‘what if it was me? What if I was still at the school, and I was their main target?’”

The mother and son planned to attend Wednesday evening’s candlelight vigil at Sir Winston Churchill Secondary School. It will be the first time he’s been back to the area for some time.

The teenager is now going to a new school and his mother said that paying to get him to the safer institution, which is outside her school zone, is well worth the money. At the same time, she wishes their claims would have been enough to stop the bullying.

“I just want to know why nothing was done, that’s all.”