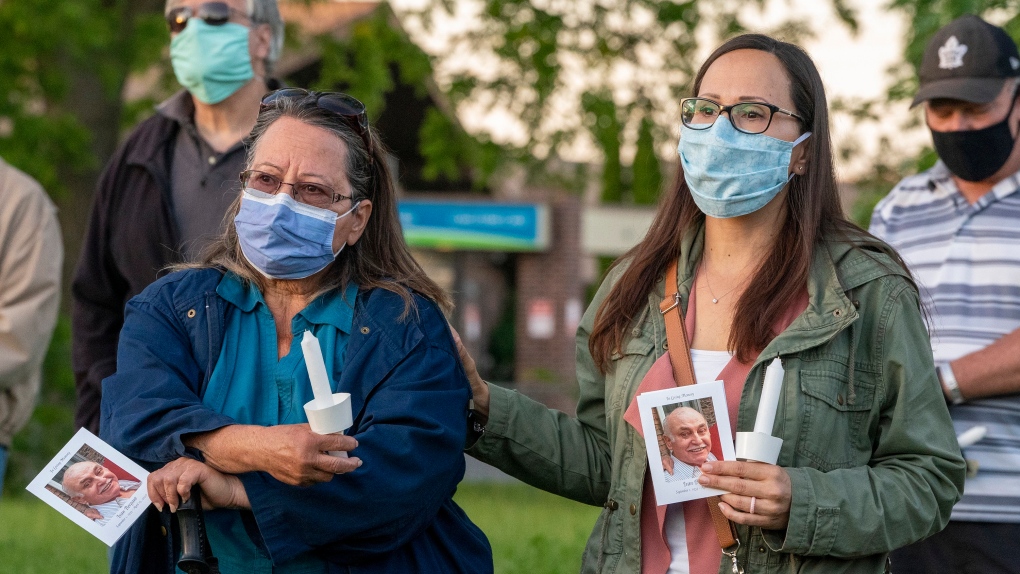 Participants react during a vigil for COVID-19 victims at the Orchard Villa long-term care home in Pickering, Ont. on Monday, June 15, 2020. THE CANADIAN PRESS/Frank Gunn

TORONTO -- A candlelight vigil was held outside Pickering's Orchard Villa care home Monday evening to honour residents who have died of COVID-19.

The vigil honoured the 78 residents who died of the virus at the home. Orchard Villa was one of the first five long-term care homes in Ontario where the military was called in to help handle the outbreak.

At the peak of the outbreak there, 340 residents and staff had contracted COVID-19.

The home was also included in a damning report by the military that outlined mismanagement and neglect at most of the Ontario homes where the armed forces were called in.

Family members lit candles and held pictures of their loved ones outside the home as bagpipes played Monday.

Cathy Parks, whose father died at the home, told CP24 that she still doesn’t feel confident in the system.

“I have questions about when family will be able to see their family again. I don’t feel confident that they’ll run it the way it should be run,” Parks said. “I think there needs to be a major overhaul at this home in particular and probably at all five homes that had military presence.”

The vigil was held in conjunction with World Elder Abuse Day. Family members have launched a class action lawsuit against Orchard Villa and Southbridge, the company that owns and operates the home.