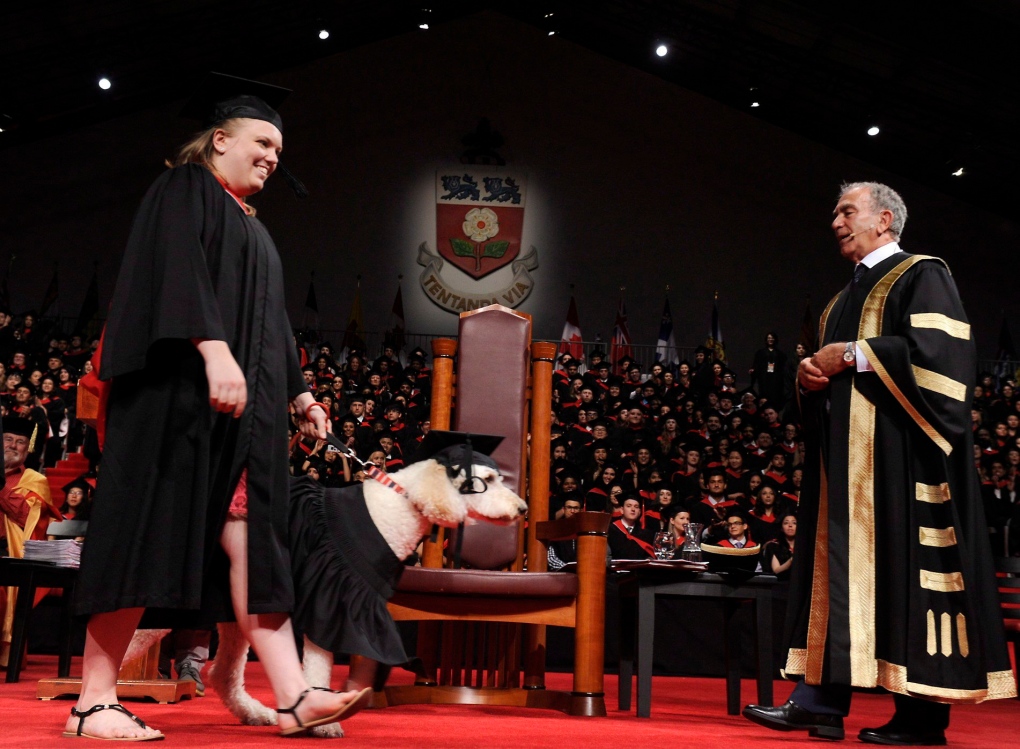 TORONTO -- A university student crossed the convocation stage today with the dog that helped get her there.

Devon MacPherson and her mental health service dog, Barkley, both donned a cap and gown as the 24-year-old graduated on Tuesday at York University.

"He deserved to go because he went to every single class with me," MacPherson said of the white standard poodle.

MacPherson said she initially went to Nipissing University, but left after her second-year exams because "something just wasn't right."

There were too many thoughts going inside her head, and day-to-day activities became overwhelming, she said. She returned home to Bradford, Ont., north of Toronto.

She was then diagnosed with generalized anxiety disorder and took a year off to recover. It was during this time she discovered a service for dogs that help with mental health issues and applied for one.

That's when Barkley arrived. She went back to school, this time at York, with a newfound confidence and a trusted friend by her side.

"He can smell when my anxiety is going to rise through a chemical called oxytocin and he nudges me when that is a bit out of whack," she said.

That nudge means its time to take a break from whatever it is she's doing to try to calm down.

Barkley goes with her everywhere, from school to work to airplanes and film festivals.

But the two spent most of their time at school. MacPherson used her time at York to research service dogs for her thesis, she said, which included examining the effect of service dogs on veterans with post traumatic stress disorder.

She has also become a vocal mental health advocate, which is why she is speaking out about her struggles and triumphs.

MacPherson is set to return to York in the fall to begin work on a on a master's degree to continue with her service dog research.