TORONTO -- Nearly a million Canadians have filed for employment insurance (EI) in a single week and long lines have started to appear at Service Canada locations in the Greater Toronto Area.

At the facility located near College and Bathurst streets, the line stretched around the corner, with each person trying to maintain some physical distance while waiting for help.

Those in line say they tried to apply online, but experienced problems so they decided to come to the office. 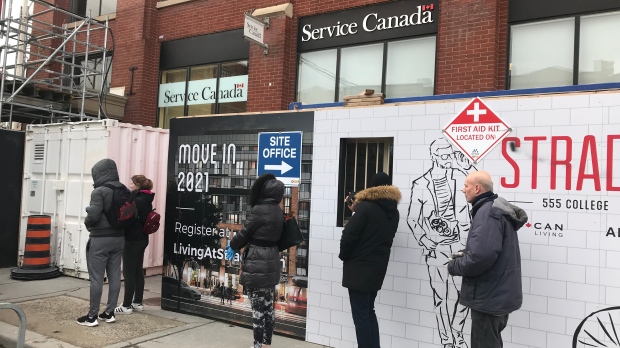 One person who works in hospitality said he was in line to drop off his Record of Employment and make sure it is processed properly.

"For people like us, we have no pay, no income," Ronnie Xu said.

Jeremy Tindal said that he ran our of EI in January, and that while he has been actively looking for employment, most options have "dried up." He said he wants to know if he qualifies for any additional aid considering the economic situation.

"Nobody is answering anything and of course rent is due in the next few days."

Last week, Prime Minister Justin Trudeau said that Service Canada received more than 500,000 applications. The government website where people can apply for EI says that due to the high number of applications, users may experience technical difficulties.

“We are currently receiving a high number of EI applications,” a notice on the website says. “If you are unable to access our system due to technical difficulties please try again later. We are aware of this issue and working to resolve it.”

At the same time, people who are calling in to Service Canada with questions related to their applications are being placed on hold for long periods of time. One person on social media said they were on the line for four hours in order to get their question answered.

I got through to @ServiceCanada_E finally! Had a super helpful exchange with someone way too pleasant for how hard they all must be working right now! Thank you thank you! pic.twitter.com/zHs6rNuZhp

Others reported busy signals and were not able to get through or wait on the line.

Hospitals aren't the only thing overwhelmed

Last week’s application numbers were twice as high as the number of claims for the month of March in 2019, according to Statistics Canada, including both regular and sick leave EI applications.

A number of Service Canada locations and scheduled outreach sites are closed. Residents can search their postal code on the government’s website to determine if the nearest facility is open.