Two men wanted by police after wave of break-ins in Oakville, Durham Region 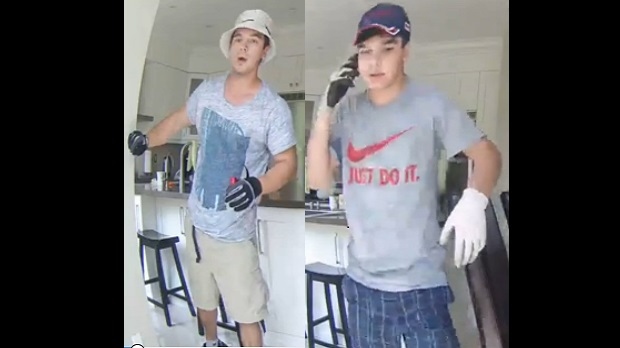 Police are searching for two suspects who they say broke into several homes in Oakville in August. (Halton police handout)

Halton police have released images of two suspects who they say broke into several homes in Oakville last month.

Police say that between Aug. 15 and Aug. 23 two males broke into homes in the Joshua Creek area.

The suspects entered each home through a basement window, exited through a main-floor patio door and allegedly stole jewelry and money.

Investigators believe the incidents are somehow connected to similar break-ins throughout Durham Region in August.

The first suspect is described as a white man in his 20s who has dark hair and was last seen wearing khaki shorts, a grey T-shirt, black gloves and a “bucket-style” hat.

Police describe the second suspect as a white man in his early 20s who also has dark hair. He was last seen wearing a grey Nike T-shirt, blue checkered shorts, white gloves and a blue baseball cap with “Canada” printed on the front in red writing.