Two men were rushed to hospital, one in critical condition, after a brazen daylight shooting in the city’s Flemingdon Park neighbourhood on Wednesday afternoon.

Emergency crews were first called to a parking lot near Rochefort Drive and Don Mills Road, just north of the Ontario Science Centre, at around 3:50 p.m. for a report of shots fired. 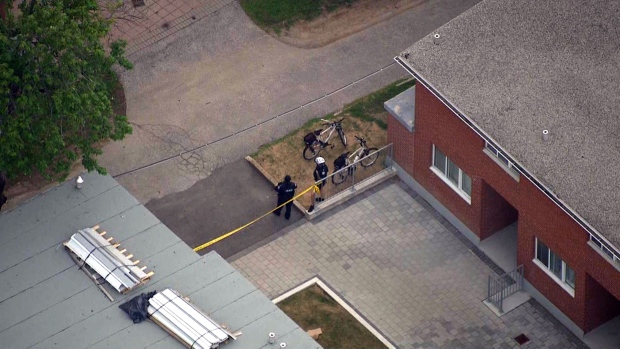 The scene of a shooting on August 7, 2019 is seen from above. (CTV News Toronto)

Once on scene, they located a male victim inside a blue sedan that had been riddled with bullet holes.

About 30 minutes after the original call, police then said that they had located a second victim at the scene, also suffering from multiple gunshot wounds.

It is believed that both victims were in the vehicle when two masked suspects opened fire on them.

Those suspects reportedly fled the scene in a black sedan. 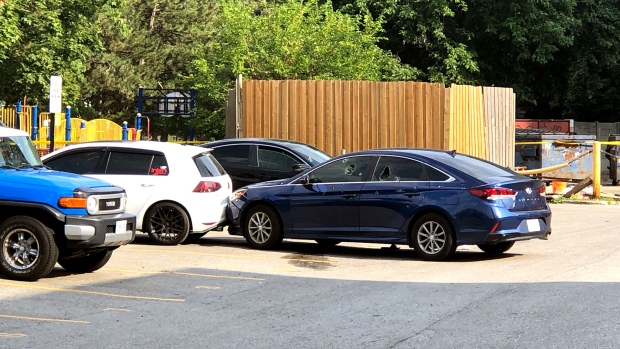 Bullet holes are seen in a vehicle at the scene of a shooting on August 7, 2019. (CTV News Toronto / Chris Broadley)

“This was not a random shooting; it was targeted and right now we are trying to figure out precisely who was here, how long they were here and whether it was a lay in wait type of occurrence,” Police Chief Mark Saunders told reporters at the scene. “But this vehicle was definitely the targeted vehicle with the two occupants who were in it.”

The blue sedan had more than 20 visible bullet holes, most of which were clustered on the driver’s side door.

Saunders said that police have already spoken to a number of witnesses on scene but are appealing to anyone else who was in the area and who may have seen something to come forward.

He said that as part of the investigation officers have also sealed off two locations at the scene and are awaiting search warrants to inspect those locations further.

“Right now we are just in the process of doing a forensic evaluation followed by canvassing. We have some witnesses already who have helped give a bit of a storyline as to what is going on but we need more information with respect to this investigation,” he said. “It is early; however the more we get and the earlier we get it the better our chance for success.”