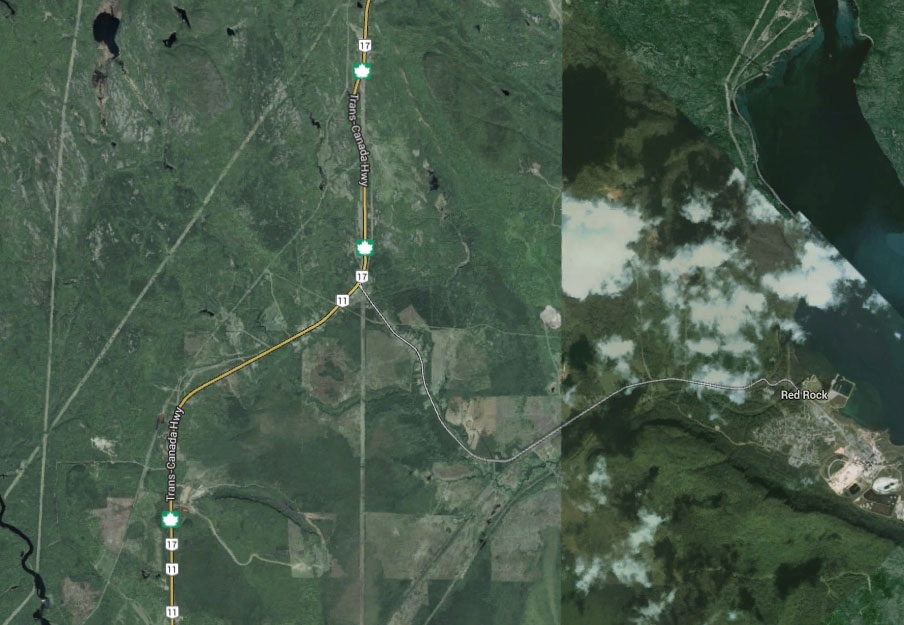 Two cyclists on a cross-country group tour are dead after a collision on Highway 11/17, near the area of Red Rock. (Google Earth)

NIPIGON, Ont. -- A married couple on a cross-country cycling tour is dead after they were hit by a pickup truck on a stretch of the Trans-Canada Highway in northwestern Ontario.

Robert Booth, 65, and Irene Booth, 69, from the Township of North Glengarry in eastern Ontario, were part of a group of 25 cyclists who set out from Vancouver last month on a Tour du Canada ride.

The group was travelling eastbound on the highway west of Nipigon, Ont., on Tuesday, when the Booths were struck by an eastbound pickup truck, provincial police said.

After hitting the two cyclists, the pickup truck then struck two westbound vehicles -- one a pickup truck hauling a cargo trailer, the other a tractor-trailer unit, police said.

The 66-year-old driver and his passenger, both from Austin, Texas, and the two occupants of the tractor-trailer were taken to hospital with unspecified injuries.

Philip McGuire runs a greenhouse across from the scene of the collision and was about 90 metres away when it happened.

"I heard a big crash and when I turned around I saw a bunch of stuff being scattered across the highway and then a transport going into the ditch," said McGuire, who phoned the police right away.

"I had no idea right away that there were any cyclists involved until I got there, had a better look and saw there were a bunch of bike parts all over the place."

That stretch of highway combines highways 17 and 11 as it heads southwest to Thunder Bay, Ont., creating a heavier traffic flow on the road.

"It's a pretty flat, single highway with traffic going both ways," said McGuire. "Cyclists only have a narrow, about 18-inch piece of highway to ride on."

Weather conditions were not a factor at the time, police said.

"Our condolences go out to their families and friends," the organization said in a brief statement. Cycle Canada provides administrative support to the non-profit Tour du Canada. The organization would not say what the tour's final destination was, but their website lists two active tours from Vancouver to St. John's, N.L.

No charges have been laid, but police said the investigation is ongoing.