Toronto's transit authority has apologized to a black man who was pinned to the ground and forcibly detained by fare inspectors last year, pledging Thursday to "do better" when it comes to battling conscious and unconscious racial bias.

The CEO of the Toronto Transit Commission said he personally apologized to Reece Maxwell-Crawford on Wednesday night as they discussed a settlement reached in a lawsuit the man had filed against the agency.

"Reece and I agreed that it's time to turn the page and start looking toward the future — a future in which the TTC is an organization that is committed to addressing bias and discrimination, both conscious and unconscious, and a future in which the TTC is a transit agency all of our customers can have faith that they are being treated fairly and with respect," Rick Leary told a news conference.

He noted that the TTC is acting on recommendations the Toronto ombudsman made in her report about how the agency handled the probe into Maxwell-Crawford's detention.

Maxwell-Crawford said he's glad to put the incident behind him. 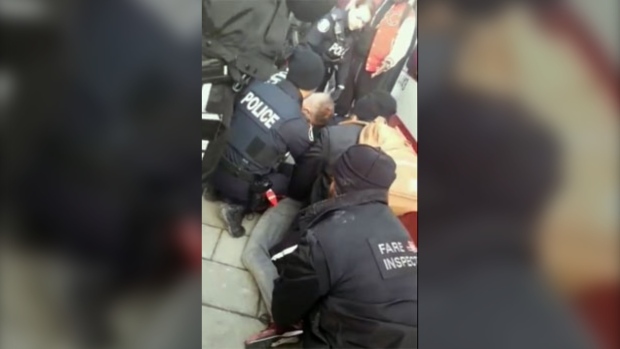 "I am heartened to hear about the TTC's commitment to implementing the Toronto ombudsman's report and engaging in a system-wide anti-racism strategy aimed directly at preventing racial profiling," he said in a written statement issued by his lawyer.

Her July report found that the TTC's investigation fell short in several ways, particularly in that it failed to analyze evidence that would suggest whether racism — conscious or unconscious — was a factor in the inspectors' actions.

At issue, she said, was what led two fare inspectors to pin Maxwell-Crawford to the ground after he boarded a streetcar.

One of the inspectors, who has since left the TTC for unrelated reasons, told investigators that he only engaged with Maxwell-Crawford after the man had been staring intently at him for a long period of time, Opler said.

But video evidence doesn't bear that out, she said. The video shows that the inspector began speaking to the passenger within two seconds of him boarding the streetcar.

Statement from #TTC CEO Rick Leary regarding the resolution of a lawsuit with Reece Maxwell-Crawford and the TTC's plans to address bias and discrimination.
The full report is available at https://t.co/bK3bBp8YqG pic.twitter.com/QBCBO86c2P

"After briefly looking away, Inspector 1 then continued to look directly at the young man for more than a minute and spoke to him five more times," she wrote, saying investigators failed to examine the discrepancy.

She said that evidence is relevant because it speaks to whether racism was a factor in the inspector's actions and whether his "stated perception of the young man as intimidating or threatening was objectively reasonable."

The TTC has since committed to adopting a "broad and comprehensive anti-racism strategy," according to a status update that will be delivered to the agency's board next week.

It includes commissioning a third party to examine historical data from the Transit Enforcement Unit. The agency has also adopted the City of Toronto's "Action Plan to Confront Anti-Black Racism," which includes training staff on the matter.

The agency is also working towards implementing all of the ombudsman's recommendations, and has introduced interim measures in the meantime.

"When it comes to combating anti-black racism and all forms of discrimination in both our operations and corporate culture, we can, should and must do better," Leary said Thursday. "This was echoed in comments I have heard from our customers, parents and our own employees. And do better we will."