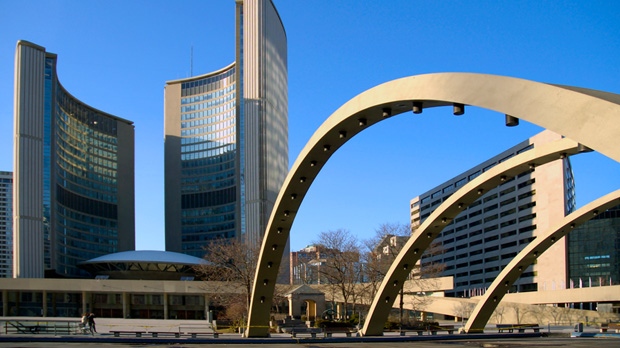 Toronto Mayor Rob Ford will mark a week back on the job with a special city council meeting to appoint two new councillors.

Toronto Mayor Rob Ford will mark a week back on the job with a special city council meeting to appoint two new councillors. Rain and warm temperatures will lead to a muggy afternoon, and the Jays play the Angels in Anaheim.

After a few showers expected to end Monday morning, Environment Canada says there will be a risk of thunderstorms throughout the day. The mercury is expected to reach a high of 27 C, and the UV index will hit a high of 7.

City council will hold a special meeting Monday morning to appoint two new councillors to fill the Trinity-Spadina and Etobicoke-Lakeshore seats, after they were vacated earlier this year.

The Ward 20 seat was left empty after Adam Vaughan stepped down in May to run in a federal byelection for the coveted Trinity-Spadina riding. The star Liberal candidate later bested the NDP’s Joe Cressy to become Olivia Chow’s successor, who resigned to become a candidate in Toronto’s mayoral race.

The Ward 5 seat was vacated after Peter Milczyn was elected as the MPP for the Etobicoke-Lakeshore riding in last month’s provincial election.

Monday's special meeting is also the first time Toronto Mayor Rob Ford will be sitting in on council since returning from a two-month stint in rehab. When asked about the meeting on Sunday, Ford said he was looking forward to it.

Those items are expected to be debated by council on Tuesday.

Toronto Blue Jays play the Los Angeles Angels at the Angel Stadium of Anaheim in California at 10:05 p.m. ET.

After falling 4-2 to the Oakland Athletics on Sunday, the Jays will face the Angels on their home turf.