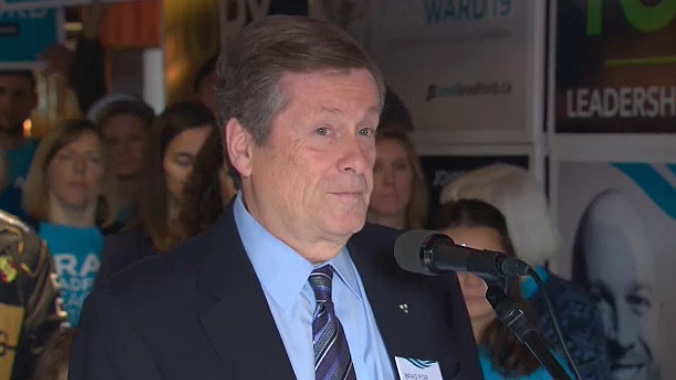 John Tory took a break from his own mayoral campaign on Friday to weigh in on the councillor race in one of the two wards in the city in which an incumbent is not seeking re-election.

Tory has typically shied away from endorsing candidates during election campaigns but at an event inside Jawny Bakers Restaurant near O'Connor Drive and St. Clair Avenue he chose to offer his public support for Brad Bradford in the Beaches-East York council race, noting that the current city planner is someone who will not be interested in “the acrimonious redbaiting and rehashing of issues” and rather will work with others to move the city forward.

“I think we have made great progress in this city working as one and pulling together but we still have some distance to go and it is mostly about the people and the attitude they bring,” he said. “Brad Bradford in my exposure to him is a person who will say ‘Yes I have a job to do in representing Beaches-East York and all the different concerns that those people have’ but at the same time he will know he is there to move forward the best interest of Toronto and that is why I came to support him today.”

A poll released by Mainstreet Research last week revealed that former NDP MP Matthew Kellway has the support of 56.3 per cent of decided or leaning voters in Beaches-East York, though Bradford was not included in that survey. The poll also found that more than half of all voters in the ward are still undecided, suggesting that it is still anyone’s race to win.

Speaking with reporters, Tory said that there is “no question” that a new council with a new mayor could reverse course on previously approved decisions like the Scarborough subway extension and a plan to rebuild the eastern portion of the Gardiner Expressway.

With that in mind, he said that he wants to make sure “we have the right environment” at city hall “to get things done.”

“If we can have a united front and decide that we are going to spend our efforts on getting the transit plan done and running the government better but not on relying on increasing taxes we are going to be better off,” he said.

Tory’s main opponent, Jennifer Keesmaat, has vowed to revisit the decision to rebuild the eastern portion of the Gardiner instead of tearing it down and has also criticized the Scarborough subway extension, though her platform does not include a plan to reverse course on that project. .

Regardless, Bradford told reporters that he believes voters want the city to move forward and don’t want to rehash past decisions.

He said that if elected he would focus on getting the relief subway line built, which he said is the project that residents in Beaches-East York really care about.

“My top transit priority has always been and continues to be the downtown relief line. That is what I hear in our community and that is what I would be going to city hall to advocate for,” he said.