TORONTO -- An Etobicoke restaurant that flouted provincial orders by offering indoor dining to customers amid a lockdown in Toronto has been ordered to close indefinitely by the city’s medical officer of health.

Uniformed police officers showed up at the Queen Elizabeth Blvd. location of Adamson Barbecue late on Tuesday afternoon to deliver the order to owner Adam Skelly after he made the decision to open his dining room to customers earlier in the day.

“The order was crystal clear. Toronto Public Health has closed this premise, it shall remain closed and the owner has been provided a detailed understanding of what his obligations are,” Staff Superintendent Mark Barkley told reporters at the scene. “If he opens tomorrow we will be here. We will have a presence and we will ensure compliance with the order.”

Skelly, however, took to Instagram later in the day to confirm his plans to reopen despite the provincial restrictions.

”Why we are getting singled out and the big, multinational corporations are all essential,” he said. “Come on guys. Enough is enough. We're opening.”

On Tuesday, customers lined up outside the Etobicoke restaurant and patrons could be seen dining inside the restaurant shortly after it opened at 11 a.m.

Mayor John Tory told reporters Tuesday that he did not yet have the circumstances of the Adamson incident before him, but said the move to defy the lockdown was a “political statement,” and the owner should “perhaps know better."

“This is a duly passed regulation put in place by the Government of Ontario to help address a very acute health pandemic, COVID-19, and there has to be respect shown to those laws and regulations by everybody,” he said. “It’s all hands on deck here in terms of people showing respect for those rules, whether or not they agree with them.”

Dozens of supporters gathered outside the business on Tuesday afternoon and a worker in a City of Toronto truck was also spotted honking and giving the thumbs up to people outside the restaurant.

Police arrived on scene shortly after the restaurant opened and Toronto police Insp. Tim Crone said bylaw and public health officials also attended and documented that it was open against public health orders.

He said that while enforcement action was likely to be taken later in the week, police would not be physically hauling away anyone gathered inside or outside the restaurant.

Police, however, returned to the establishment late Tuesday afternoon after Medical Officer of Health Dr. Eileen de Villa used her powers under Section 22 of the Health Protection and Promotions Act to issue an order requiring its closure.

By that point the restaurants was in the process of closing up and most customers had left.

“Unfortunately earlier today we had misunderstanding of what we should do and how we should do it. That direction was not the appropriate direction that should have been given,” Barkley told reporters. “Tomorrow morning we will be prepared to undertake those enforcement actions and we will also be prepared to deal with people who refuse to leave the premises.” 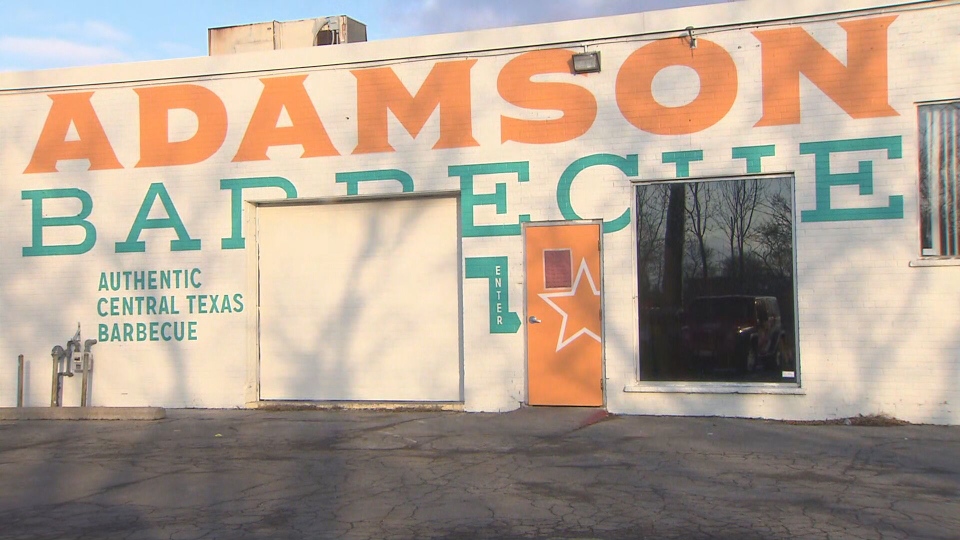 City may use physical barrier to block off access to business

Individuals who violate the province's emergency orders could face fines of anywhere from $750 to $100,000.

Speaking with reporters outside the business on Tuesday, the city councillor for the area Mark Grimes said that he believes officials should be “throwing the book” at Skelly.

He said that in addition to the fine that Adamson Barbecue could face for flouting the lockdown orders, the city will also investigate the establishment for compliance with business licensing, zoning, public health, Ontario Building Code and the Ontario Fire Code requirements.

Grimes also said that he is talking to city officials about using some sort of physical barrier to block off access to the business.

“To be clear, we are shutting them down,” he said.

'I can't get angry at any businessperson,' Ford says

In a release issued late Tuesday afternoon, the city said that it immediately began an investigation after determining that customers were being allowed to dine onsite at Adamson Barbecue but had to gather all the facts before enforcement action could be taken.

The city said that it determined that the restaurant was “providing both indoor and outdoor dine-in service, with many patrons not wearing masks and not practising physical distancing.”

Premier Doug Ford was asked about the situation earlier in the day but offered only tepid criticism over the business’s decision to ignore lockdown rules.

“I can’t get angry at any businessperson. They are hurting right now and they are struggling and they are doing everything they can to stay afloat. But you know if we let everyone open, we are going to be in worse shape,” he said during a news conference. “They have to follow the rules. There can’t be rules for one group and not the other and I just wish that they’d just follow the rules.”

When Ford was asked why he has been so quick to condemn others who break the rules but not businesses, the premier said large private parties are “a different ball of wax.”

“I’m not going to get up here and start pounding on a small business owner when the guy is holding on by his fingernails,” Ford said.

“I differentiate between someone at home being reckless and having 100 people over and partying… I don’t condone that he opened up but I feel terrible. My heart breaks for these guys and it’s not fair. But please, in saying all that, you’ve got to follow the protocols and the guidelines.”