TORONTO -- The use of face coverings in indoor, publicly accessible settings became mandatory in the City of Toronto on Tuesday, and most of the GTA is moving in the same direction this week.

Starting Tuesday in Toronto, anyone above the age of two without a medical condition that prevents them from doing so must wear some sort of facial covering when entering stores, public buildings, food outlets, community centres, houses of worship or virtually any other form of enclosed space.

The covering must surround the mouth, nose and chin.

Employees who work behind Plexiglas barriers in spaces not accessible by the public, such as retail cashiers, do not need to wear masks as part of the order.

MORE: What you need to know about Toronto's mask policy

"Evidence shows that wearing a mask indoors can help reduce the spread of COVID-19. It's a simple, affordable, and reasonable action for each of us to take to save lives," Toronto Board of Health Chair Joe Cressy said Tuesday.

But about 40 activists boarded a TTC subway car at Dundas Station without masks on, saying cities should not be making their use mandatory.

“You have a choice, this is about freedom of choice,” Chris Sky told CP24. “When the government mandate something it is never in your best interest.” 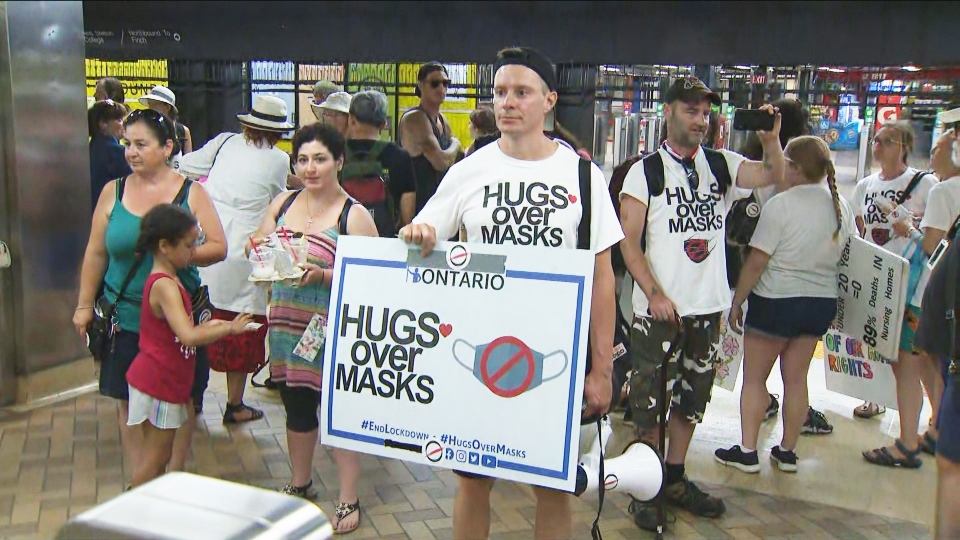 The group included Letitia Montana, a self-described “truther” who was removed from a Toronto hospital over the weekend after refusing to wear a mask, and she compared the municipal bylaw to the worst authoritarianism of the 20th century.

“Our individual rights have to be suppressed so that somebody else would feel better,” Letitia Montana, who was removed from St. Joseph’s Health Centre over the weekend for not wearing a mask, said. “Is that the kind of world we want to live in? That is what has led to the worst atrocities in history.”

The group got off the subway at Yonge and Bloor streets, handing out leaflets to passersby claiming they were “exempt” from the mask order.

“This action of this group is a fringe action, they clearly have a message they’re trying to get out,” TTC spokesperson Stuart Green said.

Green said the organization was not about to police its mandatory mask order, saying most people would follow it because it’s the right thing to do.

“When (riders) come back to the TTC everyone will wear one because they know it’s the right thing to do, that’s been the experience in other cities throughout the world.”

Toronto Mayor John Tory said Tuesday that the protest was understandable but not concerning due to its size.

“It is 40 people and 40 people out of 3 million isn’t a very big number. I am sure there are more who share the point of view but at the end of the day if there were 6,000 people that showed up at Dundas subway station to get on and make a point about masks I would say that is certainly interesting and I should look into that,” he said.

While the bylaw technically carries punishments under the Provincial Offences Act of $1,000 to $5,000, Tory has said they want to educate and not punish those found in violation of it.

Municipal officials in virtually every Ontario jurisdiction that has enacted a mask order have said they want to educate, not punish people who don’t wear masks, saying negative enforcement of the order with fines or other measures would be difficult and counterproductive.

Meanwhile, cities and regional governments in parts of the GTA look like they will also implement mandatory mask orders.

MORE: Where are masks mandatory in the GTA

Tomorrow, the City of Brampton will ratify a similar measure. In Durham Region, a mandatory mask order takes effect on Friday.

York Region Council will meet on Thursday to discuss and possibly pass a mandatory mask measure.

Epidemiologist Dr. Isaac Bogoch told CP24 with all of the municipalities moving toward mask orders; it might be helpful for someone to demonstrate proper mask technique.

“It would be very helpful for someone to provide some simple public health educational tools – how to put it on, how to take it off, how to reuse it,” he said.

Mask use is encouraged by epidemiologists in any setting where people cannot maintain at least two metres of distance between one another.

While cloth masks and face coverings do not provide much protection from the novel coronavirus, they can significantly limit its spread from an infected person’s breath.

Toronto’s bylaw excuses people who have medical conditions such as Emphysema, and Bogoch said those people should not be singled out.

“I think it’s extremely important we don’t stigmatize people who might not be able to wear a mask.”