TORONTO -- The Toronto Raptors have teamed up with Toronto Fire Services to protect families from fire and carbon monoxide related incidents.

Officials launched 'keep the fire on the court' on Monday afternoon, a new campaign that hopes to raise awareness and help prevent injuries by making sure families have alarms in case of an emergency.

“I'm a proud Torontonian, born and raised here so it's a little more close to home for me,” Magloire said. 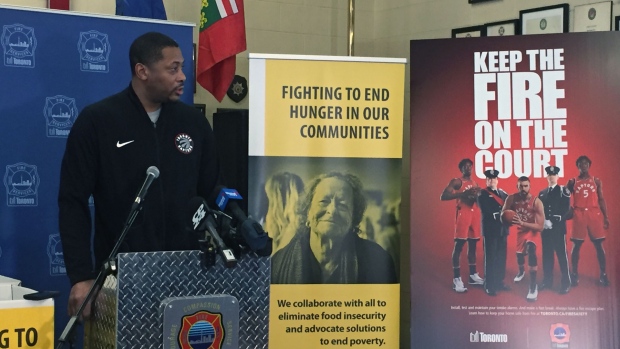 “It’s all of our parts in bringing awareness and trying to avoid again bring the worst from happening,” he said. “We as the Toronto Raptors consider this initiative very very important.”

‘In at least of four of those occasions, two fatal fires and two critically injured fires, there were no working smoke alarms in the home,” Pegg said.

“Having a working smoke alarm on every level of the home and outside sleeping areas is the only means to have early detection of a fire , early notification of escape, so we are so appreciative of the Raptors helping spread that message.”

Pegg said cooking and careless smoking are the two biggest causes of fire.

Years ago, Public Education District Chief Paul Catchpole learned the dangers of carbon monoxide first hand when he had a close call at home with his four young kids.

A problem in his furnace released the odorless gas and his alarm went off.

“Very concerned because of the impact carbon monoxide has on the body. It can at high levels lead to brain damage even death,” Catchpole said.

Thousands of alarms donated to families in need this holiday season

As part of the effort, a maker of alarms is donating close to 6,000 devices to be handed out to families in need this holiday season.

“We really want to express our gratitude,” said Talia Bronstein with the Daily Bread Food Bank.

Excited to launch the joint @Toronto_Fire @Raptors fire safety campaign this morning. Thank you @OAnunoby and @jamaalmagloire for being here to support and drive this important campaign. @cityoftoronto @MLSEFoundation pic.twitter.com/ErLEGh3vAn

Bronstein said that with the rising cost of living, there are families who can’t afford to invest in new smoke alarms and the donations will allow them to protect their homes.