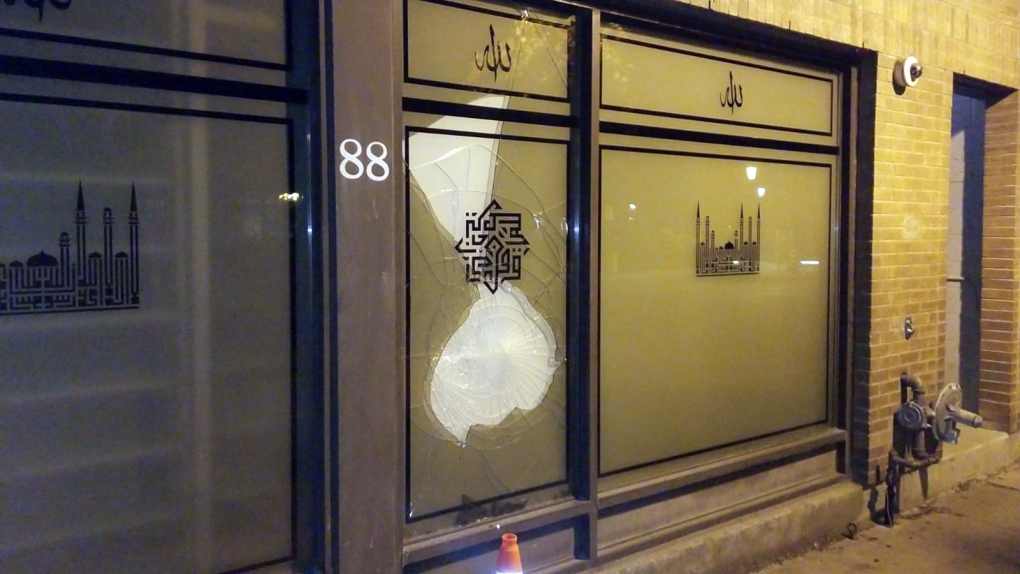 TORONTO -- A Toronto mosque has been attacked for the sixth time in three months, and the city’s Muslim community is urgently calling on officials to take the matter more seriously.

Since June 1, Toronto police say they have been made aware of “several reports of damage and mischief” at the mosque’s two downtown locations. According to police, the latest incident happened at the Adelaide Street East located on Aug. 16, resulting in broken windows.

The Muslims Association of Canada says its Toronto Masjid facilities have now been targeted in six separate incidents since June, resulting in broken windows, break-in attempts and racist graffiti.

“The broken windows from the last incident were just fixed and now they are again to be repaired for the third time in a 21 day period,” the association said in a news release on Tuesday.

“These incidents are now occurring at a frightening rate and we cannot accept to wait any longer for police action.”

Masjid Toronto has been subject to a sixth attack in 3 months. We call on Interim @jamesramertps and @TPSOperations to address these attacks and further investigate these hate incidents and Islamophobic acts towards our community.https://t.co/fLV1Vr5Jsr pic.twitter.com/u453hcxQwB

On Tuesday evening, police said they have made two arrests in connection with one of the six incidents at Masjid Toronto and are continuing to investigate the others.

Police previously said that at the time none of the incidents were to be considered hate-motivated, but confirmed on Tuesday that their hate crime unit has been made aware of the incidents and are “continuing to support the investigations as needed.”

Ontario Premier Doug Ford commented on the matter Tuesday, saying that he was “horrified” to learn about another attack on the mosque.

“This is the sixth incident in three months – it must end,” he wrote. “There’s no place for these disgusting actions and behaviour. We will find who’s responsible and get justice for all those affected.”

I was horrified to learn of another attack on Masjid Toronto. This is the 6th incident in 3 months - it must end.

There’s no place for these disgusting actions and behaviour. We will find who’s responsible and get justice for all those affected.

We stand with your community.

The National Council of Canadian Muslims, a human rights and civil liberties group, has previously said that it found the Toronto police’s initial response “inadequate.”

“Having a mosque attacked with such regularity and consistency suggests a systemic pattern and intent,” Mustafa Farooq, the organization’s CEO, said in a statement.

“We are therefore concerned by the fact that Toronto Police Service has already ruled out hate as a motive after only arresting one of the perpetrators.”

This is ridiculous and horrifying.

At Chief @jamesramertps, we called on you to take action after the last attack.

We need to see action not tomorrow - but today.

There needs to be a clear plan on fighting hate - and protecting our institutions. https://t.co/TKN5Hy48vN

In its news release, The Muslim Association of Canada said the attacks are trying to intimidate the Muslim community, and officials need to ensure they do not happen again.

Mayor John Tory also spoke out on the matter on Tuesday, saying he stands with Toronto’s Muslim community.

My statement on repeated vandalism at Masjid Toronto. pic.twitter.com/TxVFStxYcU

City Councillor Kristyn Wong-Tam also released a statement on Tuesday, condemning the attacks and saying she felt angered and saddened.

“I stand in solidarity with the Muslim community and condemn these Islamophobic acts against Masjid Toronto,” she said. “We must stand together against all forms of racism and bigotry.”

Please see my statement on the ongoing hate crimes at Masjid Toronto pic.twitter.com/4wZj3UdPSE