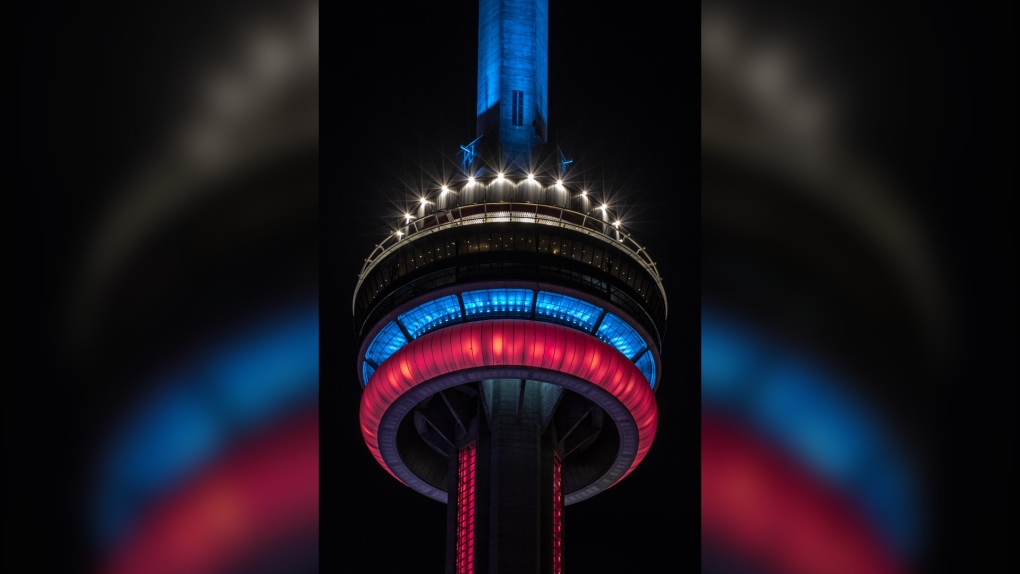 The CN Tower is shown lit up in red, white and blue in honour of the Montreal Canadiens on Tuesday night. (Twitter/@TourCNTower)

TORONTO -- Maple Leaf fans may have thought that things couldn’t get much worse after their team lost another first round series in heartbreaking fashion but a decision to light up the CN Tower in the colours of the rival Montreal Canadiens appears to be putting that theory to the test.

The local landmark, which is federally owned, was lit red, blue and white on Tuesday night after the Habs beat the Winnipeg Jets to become the only Canadian team left in the NHL playoffs.

The move prompted a significant outcry on social media with many Leafs fans wondering aloud whether somebody lost a bet and others using relatively choice words to question the decision and the motivations behind it.

“Clearly there is something here that needs to be looked into,” Mayor John Tory said during an appearance on CP24 on Wednesday morning. “Obviously there is somebody over there who is a Habs fan in which case there needs to be a full and complete investigation or somebody lost a bet.”

The CN Tower tweeted out a picture of the Canadiens-inspired lighting scheme on Tuesday night, noting that it was done to honour the team “that will go on to represent Canada’s hope for a 2021 Stanley Cup.”

But the decision did not sit well with many Leafs fans, including Tory who will soon have to raise a Habs flag at Nathan Phillips Square to fulfill a bet with Montreal’s mayor.

“I've had it in my possession (the flag) for two or three days and I just haven't been able to bring myself to go to the square, attach it to the rope and actually reel it up. In fact I even thought maybe somebody could do it in the middle of the night, take a picture and then just say it was done and we can get it back down again. But having said that, a bet is a bet,” Tory said Wednesday.

Tonight the #CNTower will be lit red, blue, and white for the @CanadiensMTL who will go on to represent Canada's hope for a 2021 @NHL Stanley Cup! pic.twitter.com/cEqsXqBefZ

Tory did take to social media on Wednesday to confirm that the Toronto sign will not be lit up in Canadiens colours.

He also told CP24 that he expects the CN Tower to look into its decision to honour the Montreal Canadiens given the bad memories it has brought back for Leafs fans.

“You just think about any one of those games at the latter part of the series there if we've won that we'd gone on and taken those Jets out. We would be down to the final four and we would have so much momentum that I think we'd be getting organized for something much better but it is what it is,” he lamented.