Toronto is scaling down ActiveTO closures on Lake Shore Boulevard West this summer as it aims to limit gridlock and issues accessing businesses along the waterfront.

On Wednesday, city council accepted the recommendation of city staff to limit the number of ActiveTO closures on the major arterial road.

Instead of recurring weekend closures, they will be "limited special events," the city said.

Future ActiveTO closures on Lake Shore Boulevard West will be based on several factors, including the number and location of planned street events in the city on a given weekend.

"Staff will also consider coordinating with other event organizers, such as was done this year with the Heart and Stroke Foundation," the city added.

ActiveTO was implemented in 2020 and closes select roadways on certain weekends in an effort to give pedestrians and cyclists more room to distance amid the COVID-19 pandemic.

"We have made huge progress reopening Toronto and that progress is going to continue. City staff are working to accommodate and balance, as much as possible, all the major events across the city that are now back," Mayor John Tory said in a statement.

"ActiveTO was a great pandemic program and city staff will work to make sure the program continues where and when it is possible."

Staff say ActiveTO should instead only continue on the street sparingly and should be “planned and well-advertised” in advance.

“In identifying dates for any future ActiveTO closures on LSBW, staff will take into consideration the number and location of planned street events on that weekend, construction impacts on parallel corridors, access to adjacent venues and impacts to traffic,” Barbara Gray, Transportation Services general manager, wrote in the report.

There are 10 street events planned on Lake Shore Boulevard West this year, compared to zero in 2020 and one in 2021.

Many residents have argued the value of ActiveTO road closures given the relatively small number of people taking advantage of the car-free roadways.

Blue Jays President Mark Shapiro has also called for the Lake Shore closure to be scrapped, submitting an open letter to city council in which he argues that it is making it impossible for baseball fans to get to the Rogers Centre for weekend games.

However, Toronto Catholic District School Board Trustee Norm Di Pasquale sent a letter to Shapiro in response to his comments and says he's "shocked" that the team is not in support of the program which encourages exercising outdoors.

"Here we have what is essentially an athletic organization advocating against the health and well-being of Torontonians who use ActiveTO and they use them in big, big numbers," he told CP24 on Wednesday.

"You can advocate for better public transportation but don't advocate against downtown Toronto families' physical and mental health."

Today’s report detailed new data collected from the only two ActiveTO closures on Lake Shore West Boulevard so far this year on May 23 and 29.

On May 23, staff say more than four times the number of cyclists and 25 per cent more pedestrians were observed on the road, Martin Goodman Trail and nearby boardwalk compared to the average number observed on the two previous days of that long weekend. 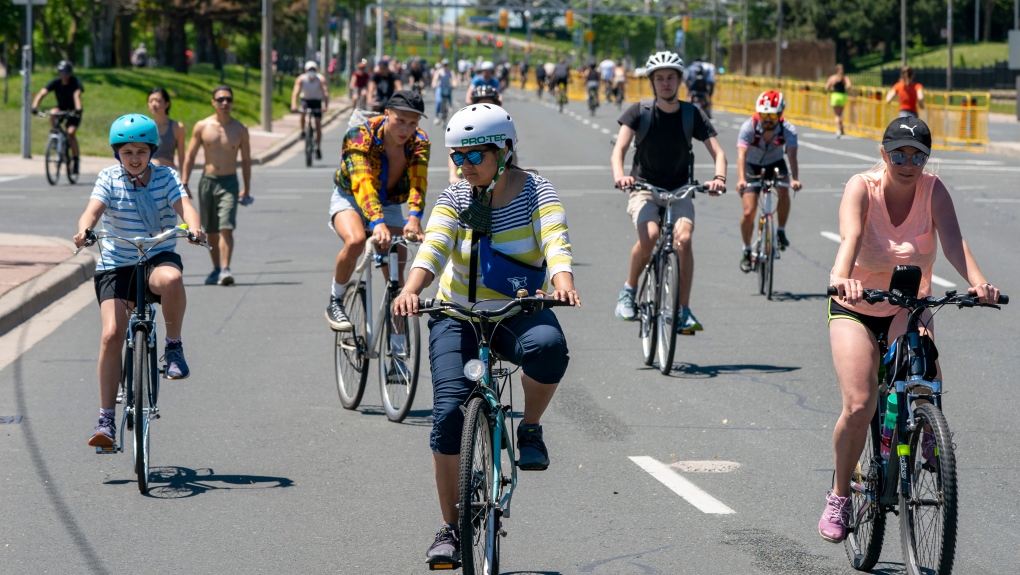 Cyclists take advantage of the ActiveTO closure of Lakeshore Blvd. in Toronto on Sunday June 7, 2020. Toronto has closed large sections of major roads to give thousands the space to exercise while physically distancing. THE CANADIAN PRESS/Frank Gunn

The report also noted concerns raised from businesses about the impact of patrons being able to access their services during the most recent ActiveTO closures.

“After the May 29th LSBW closure, and for the first time since the program began in 2020, staff received hundreds of complaints requesting that the closures end and that the road be re-opened to motor vehicles citing frustration with traffic delays and lack of access to the aforementioned locations,” the report stated.

Mayor John Tory says the city’s goal is to achieve a balance between providing road space for summer events and preventing an excessive amount of gridlock.

“We're achieving the balance as best we can, as between those who have to get around, which we understand, neighborhoods that are concerned about traffic in their own areas when we close some of these streets and on the other hand, having a kind of a liveable, fun city where people can have the experience of riding on the streets or strolling or walking” he told CP24 Wednesday morning before the report was released.

Tory has previously said that the program will likely not be eliminated entirely.

“In 2020, we know that each weekend tens, tens of thousands of cyclists and pedestrians were down there using this space. It's right next to our beautiful waterfront, lots of businesses. It's the kind of area that should be promoted for active public use, rather than like a four-to-eight lane highway,” he told CP24.

Shellnut added that the road closures provide a safe space for cyclists who he says have been facing increasing collisions on city streets.

“We (cyclists) are getting hit in great numbers out there. It's discouraging people from cycling. It's causing a lot of costs in our health- care and policing systems. We got to really address this.”

City council is expected to vote on the recommendation today.

Ontario Energy Board warns of scammers impersonating its employees

Door-to-door sales have been banned in Ontario since March 2018, but that’s not stopping aggressive sales staff from pitching expensive long-term rental contracts for items like furnaces and air conditioners.