Toronto is lagging behind other cities when it comes to the return of workers downtown. Will things ever get back to normal?

Toronto is lagging behind other cities when it comes to the return of workers downtown. Will things ever get back to normal?

A new study suggests that downtown Toronto’s economic recovery is lagging behind other urban centres and one of its authors says that it has now become clear that “we are not going back to normal.”

The study, called “Death of Downtown?” used data from cell phone towers to track the return of people to the core in 62 urban centres.

It found that the level of cell activity measured in downtown Toronto between March and May of this year was only at about 46 per cent of the pre-pandemic norm.

That put the city 49th among North American cities, well behind places like Salt Lake City (155 per cent) and Columbus (112 per cent), which have had a fulsome recovery from the COVID-19 pandemic.

San Francisco finished dead last in the rankings, with cell phone pings still hovering at around 30 per cent of their pre-pandemic norm downtown.

Karen Chapple, who is the director of the School of Cities at the University of Toronto and one of the co-authors of the study, told CP24.com this week that Toronto’s recovery has been slower, in part due to lockdowns that were deeper and longer-lasting than in many other cities.

But she said that there are also “structural” issues with Toronto’s economy that make the full return of office workers to the core going forward less likely, mainly the prevalence of technology and financial services jobs that lend themselves to remote or hybrid work.

“This is a collective action problem and Toronto seems to have been very passive, waiting for individual actors to make it all better and it's not (going to get better),” she said.

“It's going to take a real concerted effort of the public and private sectors together to figure out what are the spaces that are likely to continue to be dead in the future? What are those specific blocks? How can we liven up those blocks? How can we get new tenants there? How can we make both the private space work, the commercial space work but also the public space work? That's a problem we have together, so it is something that we should be solving together.”

The data suggest that cell phone pings in downtown Toronto dropped to as low as 28 per cent of the pre-pandemic norm, both at the outset of the pandemic in 2020 and during a devastating third wave in the spring of 2021. 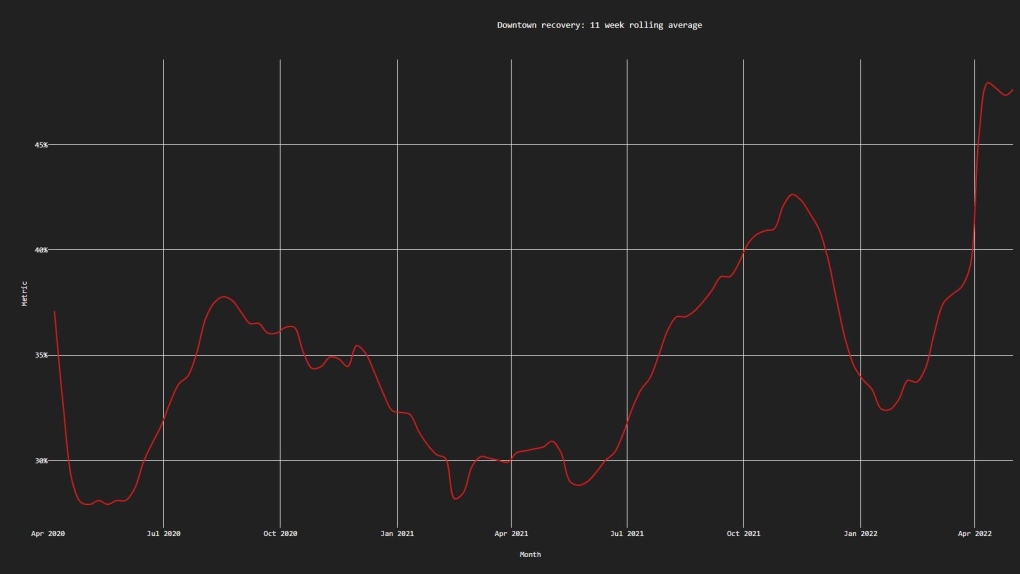 In recent weeks there has been a sustained rise in activity downtown, but the data is beginning to show signs of a levelling off and Chapple said that she doesn’t foresee a scenario where the vast majority of office workers return downtown five days a week.

Not this fall, not ever.

“We're not going back to normal,” she warned. “The question people are debating right now is will it be going to 40 per cent or 60 per cent? Will people be going back for two days a week or three days a week? That hasn’t really been settled. But if you're going to have, you know, half of the downtown economy on a hybrid work schedule, then you really have to think about how you're going to reuse that space.”

TRANSIT RIDERSHIP HAS BEEN SLOW TO RECOVER ON WEEKDAYS

Both the TTC and GO Transit have reported increasingly robust ridership on weekends this summer, as street festivals and other major events make their return to the city.

The transit agencies, however, have said that weekday ridership is closer to 50 per cent of the pre-pandemic norm.

Meanwhile, the latest data from the Strategic Regional Research Alliance suggests that overall occupancy in downtown Toronto workplaces is still only at 27 per cent of pre-pandemic levels, virtually unchanged from last month.

The slow pace of the recovery isn’t a surprise to Marcy Burchfield, who has been tracking it as part of her work with the Toronto Region Board of Trade’s Economic Blueprint Institute.

Burchfield points out that there were still travel restrictions in place in Canada as recently as April, which has “effects on people's attitudes towards going back to the office.”

But she said that things started to turn around in downtown Toronto starting in May.

She sees that trend continuing through the fall, as people begin to see the value of in-person collaboration after more than two years of Zoom meetings.

“The study sort of ends in May and that was sort of an unfortunate final data point because we have seen a real surge in activity in downtown Toronto since then,” she said. “So yeah, you know, there is no surprise when you look at the time this study was done (that Toronto lagged behind) but if you look at more recent data I do think there is a difference between what they found and what is going on now.”

The city has taken an active role in encouraging the return of workers downtown and was among the first major employers to require its employees to return to the office, at least part time.

This week, Mayor John Tory also announced the formation of a new economic recovery task force whose initial focus will be centred on “addressing the future of work in Toronto.”

In a statement provided to CP24.com, Tory conceded that the return of workers to downtown high-rises has been slower than some stakeholders had hoped. But he said that he remains optimistic about downtown Toronto.

“If you had to put it down to one reason why our downtown recovery has been a bit slower, it is the slower return to work especially by those employed by larger companies. I have been meeting with those employers consistently to assist and encourage them in having their teams return to work downtown but I understand the challenge involved,” he said.

“First and foremost, the labour shortage has made it much more difficult to set rules or deadlines as opposed to persuading and offering incentives. By definition, this is a slower process but it reflects the fact that a stricter approach may have caused some of those very same employees to change jobs.”

Tory said in his statement that he is hopeful that the fall will represent a “logical time” for more workers to return downtown.

He said that there are already “definite signs” that the “recovery is picking up speed,” including city traffic data, which suggest a recent increase in pedestrian volumes downtown.

“The approach has been more gradual and more founded on persuasion and it has been working although taking some more time,” he said. “I think one has to realize the size and scale of the challenge relative to other cities in bringing the downtown back to life.”

CANADIAN CITIES HAVE LAGGED BEHIND WHEN COMPARED TO THE U.S

The return of workers to downtown Toronto has been particularly slow when compared to several large American cities, including New York, where cell phone pings are now at about 76 per cent of their pre-pandemic norm.

Toronto’s experience, however, is not entirely unique among Canadian cities, with both Vancouver (55th) and Montreal (57th) among the cities the study identified as having a slower recovery.

Chapple said that she speaks to a lot of stakeholders and business organizations and gets the impression that they are “waiting for the employers to crack down on folks.”

But she said that may be the wrong attitude amid what appears to be a significant shift around the very nature of work in many industries.

“Cities like San Francisco and Toronto are just going to have to rethink what their downtown should look like and refocus on arts and entertainment, even non-profits and health sector and education sector. These are the future of downtowns once you have professional services kind of clearing out,” she said.

Calgarians at home and abroad are reeling in the wake of a massive earthquake that struck a war-torn region near the border of Turkiye and Syria.

U.S. 6-year-old who shot teacher allegedly tried to choke another

A 6-year-old Virginia boy who shot and wounded his first-grade teacher constantly cursed at staff and teachers, chased students around and tried to whip them with his belt and once choked another teacher 'until she couldn't breathe,' according to a legal notice filed by an attorney for the wounded teacher.