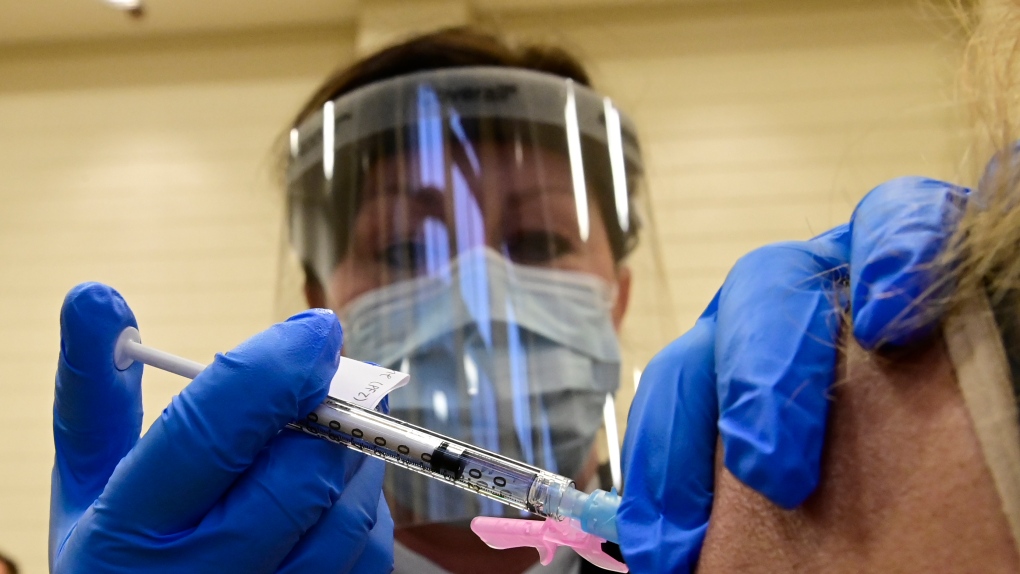 TORONTO -- Chair of Ontario’s COVID-19 vaccine distribution task force says the University Health Network in Toronto will not be receiving more vaccines in the next few days as it's expected to run out of doses on Friday.

Hillier spoke to CP24 Friday morning and said the province is in need of more COVID-19 vaccines as vaccination sites ramp up efforts to administer the shots to as many people as possible.

He acknowledged that the province’s vaccine rollout plan had a slow start but is now picking up speed.

However, the 19 vaccination sites across the province are facing supply shortages as shipments of the vaccine are not coming in fast enough from the federal government, Hillier said.

“Now we're at a capacity, even with the few sites that we have running...we’re already at a capacity to put [shots] to far more people than we have vaccines coming in,” he said.

Hillier's remarks echo comments he made earlier this week where he disputed claims that vaccines are sitting in freezers across the province.

Toronto’s University Health Network is one of those sites facing limited supply as it’s expected to run out of doses by the end of today.

We’re out of vaccine @UHN on Friday and have 3000 people booked per day Sat, Sun, Monday. Urgently need vaccine. https://t.co/lqS6GA0eE8

Hillier said UHN will not receive more doses of the vaccine ‘today or tomorrow’ unless vaccines are reallocated from other sites.

“We're looking around to see if we can reallocate any more from any other place, but those other vaccine sites are equally efficient. They're really focused on getting those vaccines into long-term care homes and essential workers and health-care workers and residents who are trapped there, so to speak,” he said.

Hillier said UHN and other sites will have to back up on their efforts until more shots become available.

“We'll slow that capacity down until the next vaccine allocation arrives, that’s sometime next week, we're not sure of exactly which day yet. And then we'll pick it up again, do them as quickly as possible, and we're going to be stopping-start for a few weeks because the vaccine allocations are still very small,” he said.

Infectious diseases specialist Dr. Issac Bogoch said he sees the supply shortage as a "good problem to have."

"Obviously we want more vaccines, we don't want to cancel anybody getting a vaccine, but this tells me that the vaccines are being deployed," Bogoch told CP24 on Friday.

"We've been talking for probably about a week and a half saying you have to do this faster, you have to ramp up [vaccinations], you have to scale up. So, if you're running out, that's a good place to be in my books," he added.

Over the Christmas holidays, the government came under fire for pausing inoculations despite record-high COVID-19 cases and hospitalizations.

Hillier acknowledged that the government made a mistake and will not take any more days off from administering the shots.

Earlier this week, the provincial government announced its goal of inoculating all long-term care home residents and staff by Jan. 21 in the hardest hit areas of the province: Toronto, Peel Region, York Region and Windsor-Essex.

But as inoculations are picking up pace, Hillier said he is not satisfied with the status of the rollout plan.

“I would have liked to move much faster. I'd like to have more vaccines to allow us to go more quickly around the rest of the province, not just the four regions that we're focusing right now with the long-term care homes and retirement homes.”

The province began administering its first shipment of Pfizer-BioNTech’s COVID-19 vaccine on Dec. 14 to health-care workers at UHN and The Ottawa Hospital, as part of a pilot project.

To date, the province has received roughly 95,000 doses of the Pfizer BioNTech vaccine and are expecting 50,000 more doses this week, followed by 80,000 doses every week for the rest of January.

Meanwhile, 53,000 doses of Moderna’s vaccine arrived in the province during the week of Dec, 28 and another 56,000 were expected to arrive this week.

So far, only Pfizer and Moderna’s vaccines have been approved by Health Canada but Hillier said he’s asking for “a little push” on approving AstaZeneca’s vaccine as well.