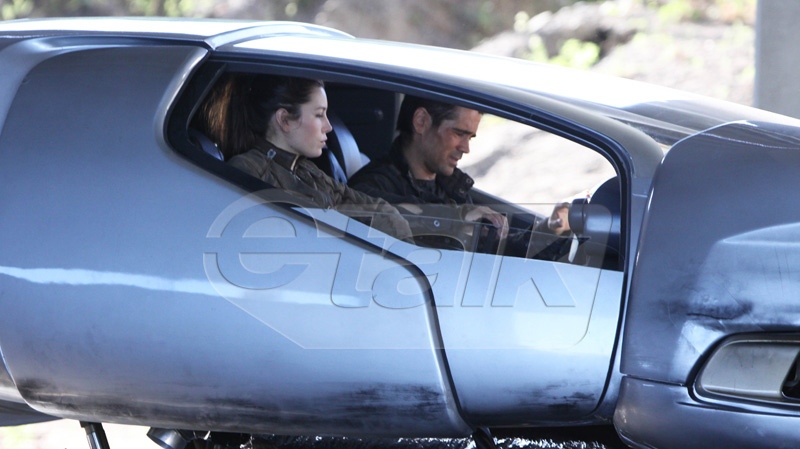 Jessica Biel and Colin Farrell are seen inside a futuristic hover craft car while filming 'Total Recall' in Toronto on Tuesday, July 26, 2011

The Toronto film industry posted its strongest numbers in nearly a decade, bringing in $1.13 billion to the local economy last year, according to the City of Toronto.

The last time the industry spent more than $1 billion was in 2002, when a weak Canadian dollar -- sitting around 63 cents U.S. -- made filming north of the border attractive to international studios.

But a stronger Canadian dollar followed by the economic recession in 2008 dealt dual blows to the industry.

By 2008, major film production activity in Toronto was down to just $499 million, half of what it stands at today.

Today, with the Canadian and U.S. dollars near parity, the city is pointing to talent, excellent studio facilities and government incentives as reasons for the increase in spending.

"Our success in 2011 is due to our world-class talent behind and in front of the camera, our studios' ability to attract more and larger productions, a deep and experienced supplier base and the city's and province's efforts to make Toronto an attractive production location," said Coun. Michael Thompson, chair of the city's economic development committee, in a statement issued Monday.

Paul Bronfman, chairman of Pinewood Toronto Studios Inc., said a film tax credit first offered by the provincial government in 2009 played a large part in helping to boost film spending in the city.

The greatest increase in spending came in the area of feature films. Not only were there more feature films produced in Toronto in 2011 than in 2010, producers also spent more on those movies.

Toronto also hosted two of its largest feature films ever in 2011: a big-budget remake of the 1990s film Total Recall, with a reported $200-million budget, and the alien-thriller film Still Seas.

The Toronto film industry employs about 25,000 full-time workers, according to the City.