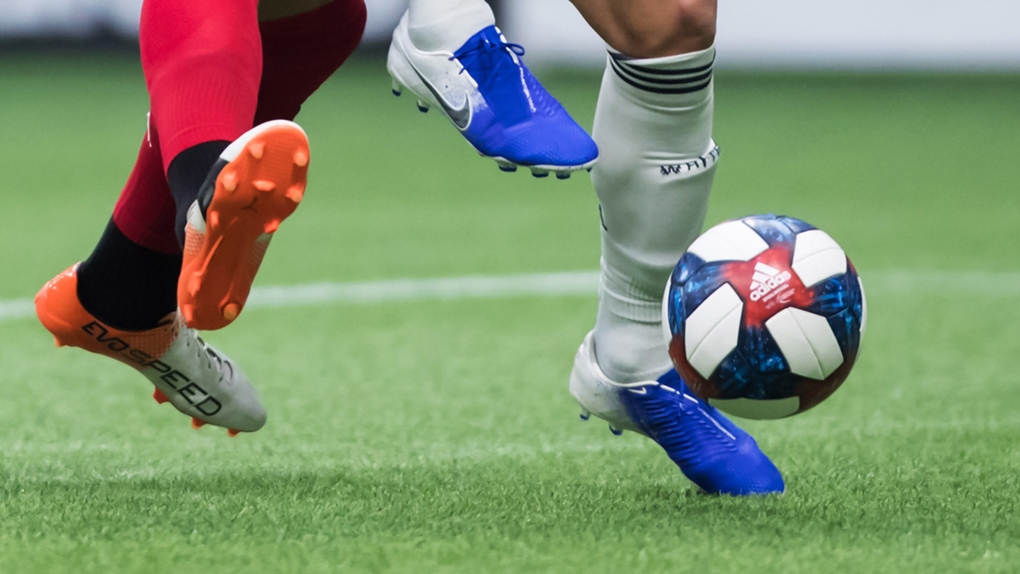 Toronto FC's Terrence Boyd, left, and Vancouver Whitecaps' Scott Sutter vie for the ball during the second half of an MLS soccer game in Vancouver on Friday May 31, 2019. THE CANADIAN PRESS/Darryl Dyck

TORONTO -- Toronto FC is hoping your phone will help unearth a soccer diamond in the rough.

The Major League Soccer team is unveiling TFC Widenet, an app that evaluates young athletes six and up based on their speed and skills. In its present form, the free app will help TFC find kids who are fit and fast -- and measure them against their own academy products.

The official launch is Tuesday, with the app available on iOS or Android.

"Just looking at the results, you're going to be able to see folks that are maybe at our academy level, maybe above. And perhaps they've fallen under the radar," he added.

In its current form, the app combines augmented realty (AR) technology with the phone's camera to measure an individual's athletic ability while they run a 20-metre sprint and a 200-metre shuttle.

The user sets the course, which is verified by the app. The participant then hands their phone to a friend or sets it up on a stand to film the drills -- either a simple 20-metre sprint or back and forth five times for the 200-metre shuttle.

The app verifies the data which then goes back to TFC. The information also is entered in a leaderboard, allowing participants to see how they fare against others their age and gender.

The app, which will be expanded to offer more measuring tools, comes out of MLSE's desire to harness technology for the good of its teams.

That came in-house from MLSE Digital Labs, whose staff numbers more than 100. Teherany calls it "the largest and deepest technology organization in pro sports."

While the app is simple to use, a lot of time and work went under the hood to make it so.

"We had an idea from a team standpoint," said Liston. "Humza and his group came in from the technology side and they said "Sure, we can do it.'

"The drive is to get any kind of competitive advantage we can, at any time."

Liston recalls a testing session in Hamilton several years ago. There were five tests, which was going to require eight coaches and two hours.

"Then the idea became how 'OK, can we do this simply and how can we do it anywhere?"' said Liston.

They chose the 20-metre sprint and 200-metre shuttle, because they can be done in park or gym.

MLSE has been working on the digital talent search for a while but the idea was accelerated by the pandemic. Suddenly testing talent remotely was more than a mere luxury.

"It's frankly a very new world," said Teherany. "And the fact is if you're not all-in with digital, you're going to be playing catch-up."

While Toronto and other MLSE teams already "scout across the planet," Teherany says that search can be assisted digitally -- especially in a world struggling with COVID-19.

"I don't know how you scout a year from now without having technology tools like this. I think it becomes harder. I think those that have these skills and technologies and can actually build it into the way they scout ... I think it's going to be must-do's."

"We are now looking at all things technology, innovation and digital across MLSE from a business perspective. And more and more as part of our MLSE Digital Sports Performance Labs, we're partnering with our (teams') front offices to understand where we can double-down on digital and innovation to continue to gain a competitive advantage in the quest for more championships for the city.

"If we can do anything obviously to drive an edge using analytics data, sensors, access to real-time information, then that's what we're there to do. I think this first internal innovation here with TFC is one of many to come. We've got a lot more in the works."

This report by The Canadian Press was first published Aug. 25, 2020.