OSHAWA, Ont. -- A Toronto police officer accused of beating a young black man nearly three years ago testified Tuesday he was acting in self-defence when he delivered the punches that ruptured the man's eye.

Taking the stand in front of a packed courtroom in Oshawa, Ont., Const. Michael Theriault acknowledged he caused Dafonte Miller's severe eye injury, but said it happened as he was trying to disarm and subdue the teen.

Theriault was off duty at the time of the encounter in the early hours of Dec. 28, 2016. He told court Miller attacked him and his brother Christian with a pipe or metal pole after the pair caught him and another young man stealing items from their parents' truck.

The 27-year-old Theriault said he chased Miller into a dark, alley-like area between two homes and bodychecked him into a fence while his brother followed closely behind. He said that's when he felt something hit his body -- something that "didn't feel like a fist," he said.

Theriault said he started punching Miller wherever he could, as hard as he could, after seeing his brother get hit on the side of the head with the pipe.

"I was trying to distract him so he would at least loosen his grip on the pole," he said.

At no point during the encounter did Theriault identify himself as a police officer, though he did tell Miller later on that he was under arrest, court heard. Theriault said he was focused on making sure Miller didn't escape.

"It just didn't come to my mindeverything happened so fast," he said. 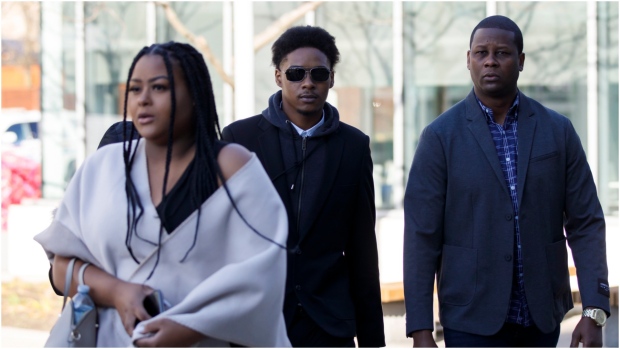 Prosecutors, however, suggested Theriault didn't identify himself as an officer -- as his training would dictate -- because his intention wasn't to arrest Miller, but to beat him.

The Theriault brothers are jointly charged with aggravated assault in the incident that eventually caused Miller, who was 19 at the time, to lose his left eye.

They are also separately charged with obstruction of justice for the way they portrayed the incident to investigators. They have pleaded not guilty to all counts.

At the heart of the case is who wielded the pipe that night, and where it came from, with prosecutors and defence lawyers providing vastly different narratives. The pipe, which is more than a metre long, was shown in court earlier in the trial.

The now 22-year-old Miller testified last week that he was severely beaten with a pipe and that he never had a chance to fight back.

He told the court he was out walking with two friends when the Theriaults started questioning them about why they were in the area. He said the pair began chasing him when he and his friends walked away.

Theriault testified Tuesday he and his brother were in a closed garage when they heard noise coming from their parents' truck outside. He said he told his brother to open the door and rolled under it before it was fully raised, not knowing what he would find outside, then ran after Miller despite not having shoes or a jacket on.

Prosecutors suggested Theriault, an officer used to having at least a gun and a baton at hand, would have armed himself before chasing a potentially dangerous stranger into a dark area.

Crown attorney Peter Scrutton argued Theriault took the pipe from the garage as he ran out and suggested the reason the officer bodychecked Miller on the fence was because one of his hands was full. Otherwise, he said, Theriault could simply have grabbed the teen, he argued.

Theriault said that wasn't the case. "Not sure why I bodychecked him, I just did," he said.

He told the court he never lost sight of Miller during the chase and did not see the young man carrying a pipe as he fled. "Still to this day I don't know exactly where it came from," he said.

During his testimony, Theriault repeatedly denied hitting Miller with a pipe or seeing his brother do so.

He told the court the only person using the pipe as a weapon was Miller, drawing laughter and expressions of incredulity from some in the courtroom. 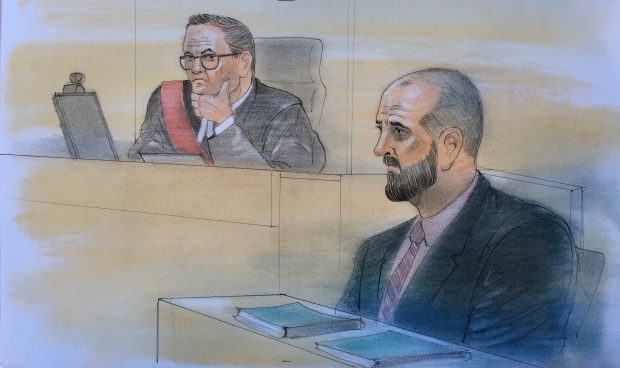 Theriault said he was able to disarm Miller after his brother charged the teen and placed him in a headlock. But he testified Miller continued attacking his brother, so the two of them kept punching Miller.

There was a brief lull in the fight, and Theriault said he thought to call 911 but dropped his phone when he saw Miller hit his brother again. He said he punched Miller some more until the fighting subsided again.

Miller then walked over to a home and started banging on the door, Theriault said. The officer grabbed the pipe and held it up to ensure Miller didn't get it back, he said.

When the young man turned around again, Theriault noticed he was hurt, he said.

"I saw that he had an injury on his face at that point," he said, but he couldn't say which blows caused it.

Moments later, Theriault told Miller for the first time that he was under arrest, he said. Both Christian Theriault and Miller called 911 shortly afterwards, though Michael Theriault took Miller's phone after he dialled, court heard.

In the accounts they gave separately to police after the incident, the brothers said they weren't injured during the encounter, though Christian Theriault said his head and limbs were sore.

In a second interview with police on Jan. 9, 2017, however, Christian Theriault said he was dazed by the blow to his head and had since been diagnosed with a concussion.

Theriault testified he was not injured in the incident, but felt "general soreness."

Miller's lawyers have previously alleged outside court that race played a role in the attack.

The trial is expected to resume next year.

This report by The Canadian Press was first published Nov. 12, 2019.