Cross-examination of Dafonte Miller wraps up in Oshawa court

The cross-examination in the case against a Toronto police officer and his brother, accused of beating Dafonte Miller back in 2016, wrapped up inside an Oshawa courtroom Friday evening.

Miller, who has been on the witness stand for two days now, was asked specifically by defence lawyer Michael Lacy about a video of an unrelated incident recorded in a Whitby restaurant in May 2018.

Court was shown a video in which Miller appears to be speaking with the owner or manager, who tells him he can’t use the washroom unless he buys something.

Miller is then seen leaving the restaurant.

That’s when the defence claims Miller made a threatening gun like gesture with his hand and forefinger.

“As you walk by, you gesture with your hand, like you are shooting a gun,” defence lawyer Michael Lacy suggested to Miller on the witness stand.

Miller denied he was threatening anyone.

“I agree that is what I was doing, but it wasn’t toward the store owner. I already passed the door. I was talking to my friend,” he told the court.

The crown objected to the video being played arguing it wasn't relevant to the case. However, the judge allowed it. 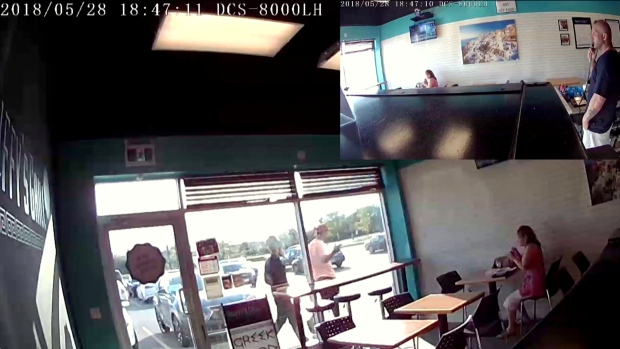 Miller, 22, completed his testimony Friday afternoon. The defence will call its first witness next week.

Michael Theriault and his brother Christian are charged with aggravated assault and obstruction of justice in connection with the 2016 incident.

Dafonte Miller lost an eye when he was brutally beaten in a Whitby neighbourhood in the early morning hours of Dec. 28.

Miller testified earlier that he was hit with a pipe by the accused men in what he calls an unprovoked attack.

The defence claims that Miller was breaking into cars with two other friends on the night in question and that he attacked the Theriault brothers when they confronted him.

The brothers have pleaded not guilty.

The trial is set to continue on Tuesday.