Members of a group who say they're in support of downtown Ottawa residents held an anti-freedom convoy protest outside Toronto City Hall Sunday.

The event is scheduled from 1 p.m. to 3 p.m. and organizers say it will be intentionally “non-confrontational.” Shortly after the event began, there appeared to be over 100 participants.

Organizers say they plan to march up Bay Street to Gerard Street, proceed to Yonge Street and end at Yonge and Dundas Square. 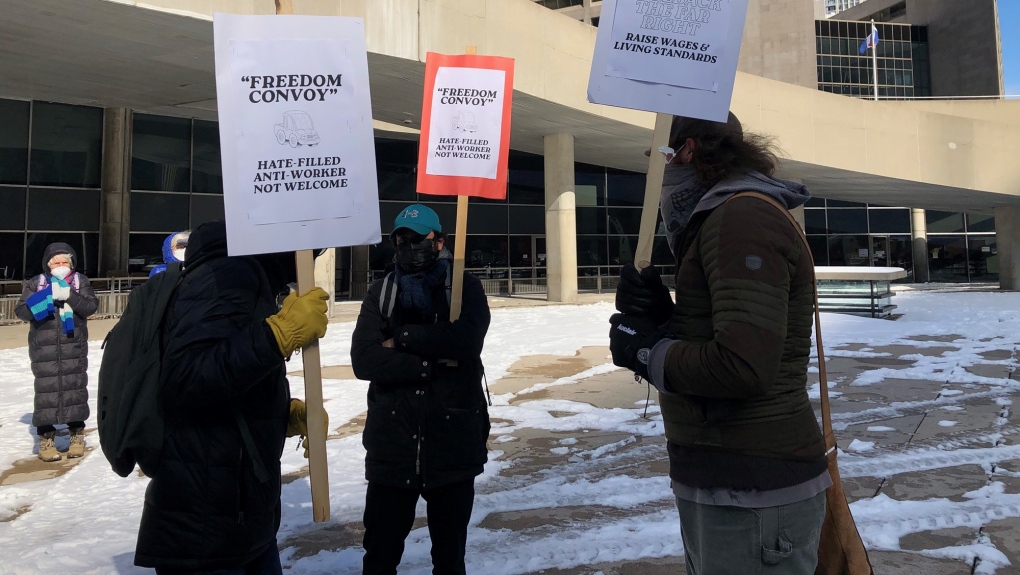 “[Ottawa] neighbourhoods have been subjected to almost three weeks of racism, anti-Semitism, misogyny and homophobic harassment, bullying and intimidation,” the description of the Facebook event made for the protest says. “They have had to live with the noise and toxic fumes of diesel engines and at times the blaring of truck horns.”

“We are marching to ensure that this does not happen in the streets and neighbourhoods of Toronto.”

On Friday, Toronto police closed a number of roads downtown in an attempt to discourage potential protests. While some of the closures have lifted, areas such as Hospital Row and Queen’s Park remained closed to vehicle traffic. There continues to be an increased police presence downtown.

Community Solidarity TO holds rally and march against “freedom convoy”. Video and images from the event. @CTVToronto pic.twitter.com/p87guKPg3a

Police said five or six large trucks arrived in Toronto Friday night with the intention of protesting but were turned away.

With files from Beth Macdonell.

The gunman who attacked an Independence Day parade in suburban Chicago, killing at least seven people, legally bought two high-powered rifles and three other weapons despite authorities being called to his home twice in 2019 after he threatened suicide and violence, police said Tuesday.

Thousands of delegates gathered for the annual Assembly of First Nations meeting Tuesday to talk about the Pope's visit, Indigenous rights, housing and other priorities, but those issues were upstaged by claims of corruption and infighting over the leadership of National Chief RoseAnne Archibald.

As passport processing delays and long lineups persist at Service Canada offices, the federal government is looking to buy 801 chairs for people standing in line by the end of this week.

With doctor shortages causing emergency rooms around the country to shut down, a northern Ontario hospital is scrambling to stave off the same fate.

More than half of Canada's AstraZeneca vaccine doses expired, will be thrown out

Canada is about to toss more than half of its doses of the Oxford-AstraZeneca COVID-19 vaccine because it couldn't find any takers for it either at home or abroad.