TORONTO -- Three staff members at a Markham, Ont. long-term care home have tested positive for COVID-19 just days after a woman who lives at the facility contracted the virus.

On Saturday, York Region Medical Officer of Health Dr. Karim Kurji said the Markhaven Home for Seniors was experiencing a respiratory outbreak after confirming that a woman in her 70s had contracted the virus.

Kurji said the woman is doing well and is in self-isolation inside the seniors’ home. He said that public health is still investigating how the woman was infected.

On Wednesday, officials confirmed three workers at the same seniors' home tested positive. Two of the workers are residents of York Region, while the other lives in Toronto and are all in self-isolation.

Markham Mayor Frank Scarpitti said that all patients have been separated and visitors are being restricted at the facility.

"This is concerning," Scarpitti said on Saturday. "Public and the staff at Markhaven are taking every necessary precaution."

William McCormick's mother is a resident at Markhaven and said that he's concerned about her safety and wellbeing.

"It’s scary. My family, this is all they think about, my mom being in here. And we can’t go in. We can’t take her out," McCormick told CP24 on Wednesday.

McCormick said he's been trying to keep his mother's spirits up by visiting her from outside her unit, and video-calling members of the family who want to stay in touch. Despite that, McCormick says it's difficult to support his mother through a pane of glass. 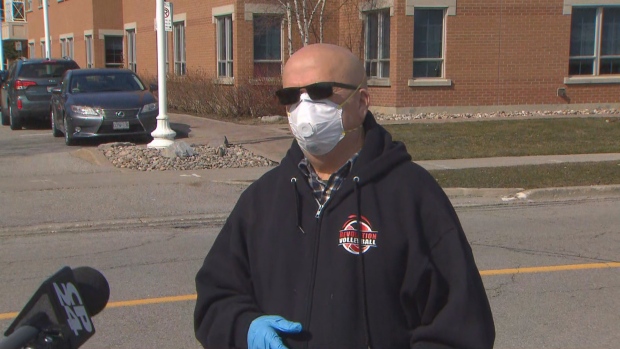 'It’s sad to watch her be this lonely," McCormick said, adding that the long-term care home is in desperate need of personal protective equipment (PPE).

"We have to make the public more aware: These gloves, these masks, these gowns they’re needed. If anybody has any extra, or knows a place they could get them, to donate you can come right here, they have a donation box out in front for Markhaven and all the other seniors homes. It’s very frustrating."

Markhaven has been in operation for over 50 years and has nearly 100 beds for long-term care.

At least 688 people have tested positive for COVID-19 in Ontario, including several health care workers.