Tens of thousands of Canadian flags were planted around Sunnybrook Hospital Sunday with hopes of bringing Remembrance Day joy to veteran residents.

Hundreds of volunteers gathered in an auditorium at the north Toronto hospital before heading outside to plant 47,000 flags — 100 for each of the veteran residents in the Sunnybrook Veterans Centre.

“It’s something that you never forget and you never — you talk about it, but you don’t really want to talk about it that much, you know?” 99-year-old Gertrude “Gertie” Beharriell, who served overseas as a nurse during the Second World War, said.

Albert Wallace, 99, was mostly smiles, but at times tearful, as he greeted volunteers ahead of their work. 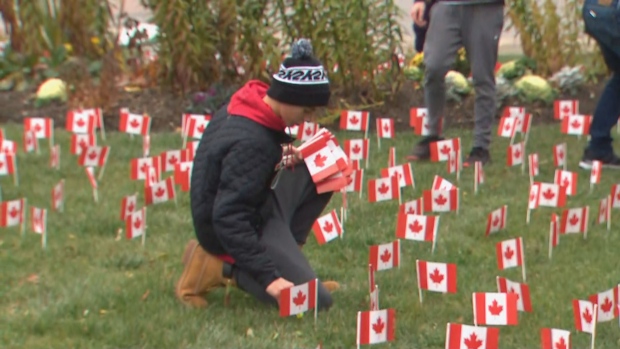 “On behalf of the veterans of Sunnybrook and Canadian veterans, I want to thank you sincerely for joining us to plant and raise a flag today. It’ll be quite a sight out there watching you guys digging,” Wallace, whose plane was shot down during the Second World War, leaving him a prisoner of war for two years, said.

“To us Canadian veterans, Remembrance Day is everything. Now we will enjoy watching your patriotic passion while you plant flags in our favour. Thank you.”

According to Wallace’s daughter, Barb Trendos, Wallace was a volunteer at the Veterans Centre for 25 years before becoming a resident there earlier this year.

“Well you know with these guys, they saw lots of stuff that they don’t want to talk about, or they just can’t talk about it. It’s just, it hurts,” Trendos said.

While Trendos said she has for years appreciated the volunteer flag-planting at Sunnybrook, Sunday marked her first time joining in. 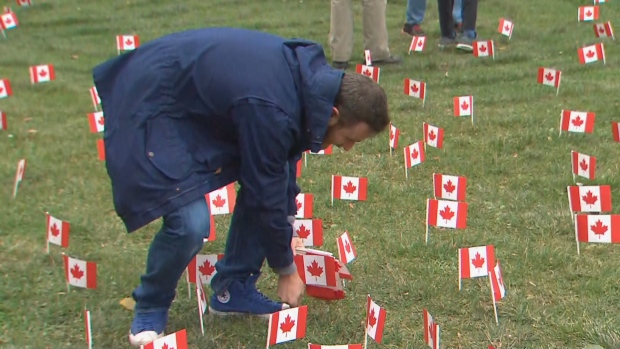 “It makes me feel like Remembrance Day has come into its own. Because for a long time, when I was younger, I don’t think that Remembrance Day really got its due. And for kids, it was a day off school. It was a day to go to the mall. Nobody remembered. Nobody did anything in remembrance. I’m just happy to be here and be part of it,” Trendos said.

Suzanne Totten, whose father served in the Second World War, planted flags alongside her husband, son and two grandchildren.

“I just don’t want the kids, our grandkids to forget what our parents did and what everybody has done for the country. We should honour these people for sure. I’m just trying to pass it on,” Totten said.

Royal St. George’s College teacher Phil Spacie, whose great uncle died as a bomber pilot in the Second World War, was part of a large group of volunteers that included his wife and three young children. 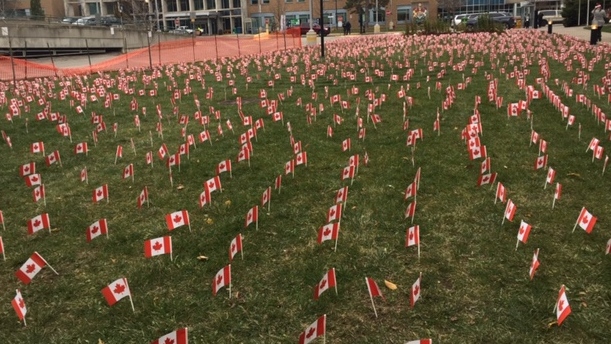 “This is the first year that all three of mine have been old enough to participate and show our appreciation,” he said.

Of that appreciation, veteran Beharriell said: “Oh my god, I think that’s, that’s so, so beautiful to think that they — even the little babies out here today....I think the country might be in good shape when you see all that. Things will go on.”