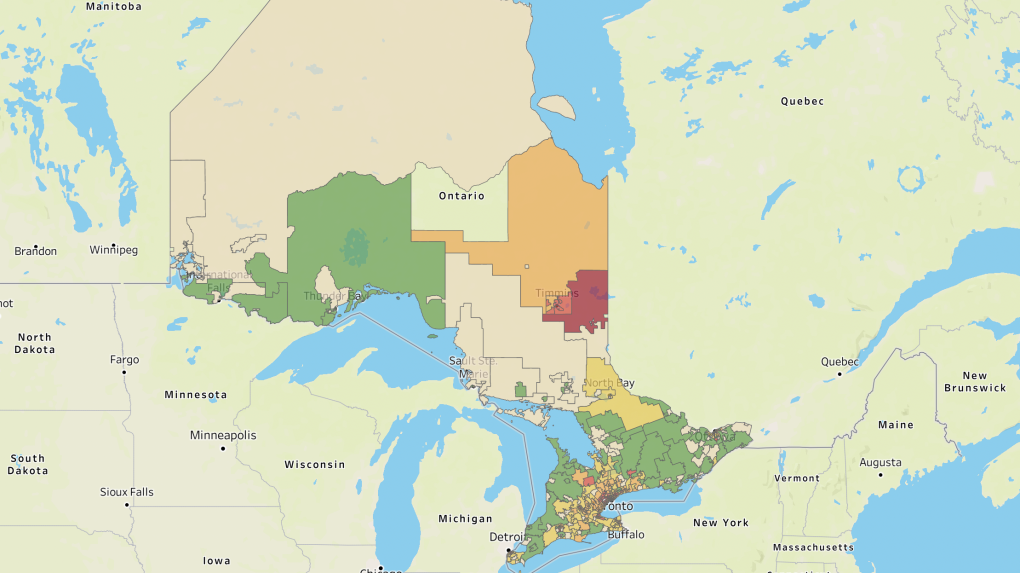 Ontario’s vaccine rollout has significantly accelerated in the past month, with first dose vaccination rates increasing across the province.

However, not all regions of Ontario are acquiring their first doses at equal rates.

Comeau, a retired mathematical statistician in Ontario, has been collecting data provided by various federal, provincial, municipal, and third party organizations and put it into visual representations for the general public to digest over the course of the pandemic.

The latest vaccination rate map, put together with data from the Institute for Clinical Evaluative Sciences (ICES), allows users to hover over each region in Ontario to uncover that area’s vaccination rate.

ICES updates their first dose percentage data weekly, says Comeau, and that data is in turn used to update the map. It is worth noting that the percentages are calculated using the total regional population, not the adult-only population. Because of this, percentages may be lower than expected, as children 12 and under are not currently permitted to receive a vaccination. Additionally, ICES does not include long-term care residents in their vaccination data.

In addition to the interactive map, Comeau has also arranged the data to be viewed as rankings.

According to the most recent data, ending the week of May 24, these are the Ontario regions with the highest first dose vaccination rates as of May 24:

Conversely, according to the most recent data, these are the Ontario regions with the lowest first dose vaccination rates:

Four of the five regions with the highest first dose vaccination rate are in Toronto, with only one provincially designated hot spot postal code making the list — M1C.

The vaccine rollout in Toronto and the other cities hosting hot spots, accelerated in the spring when vaccines began to be reallocated to the areas.

In April, the Ontario government decided to begin allocating 25 per cent of all incoming vaccines to provincial hot spots. For the weeks of May 3 and 10, hot spot vaccine reallocation was increased to 50 per cent at the request of the Ontario COVID-19 Science Advisory Table.

On May 28, the Ford government announced it would accelerate its second dose strategy after reaching 75 per cent of eligible Ontarians having received their first dose.

U.K.'s Boris Johnson defiant even as dozens of officials quit

British Prime Minister Boris Johnson has rejected clamors for his resignation from his Cabinet and across the Conservative Party, digging in his heels Thursday even as dozens of officials quit and previously loyal allies urged him to go after yet another scandal engulfed his leadership.