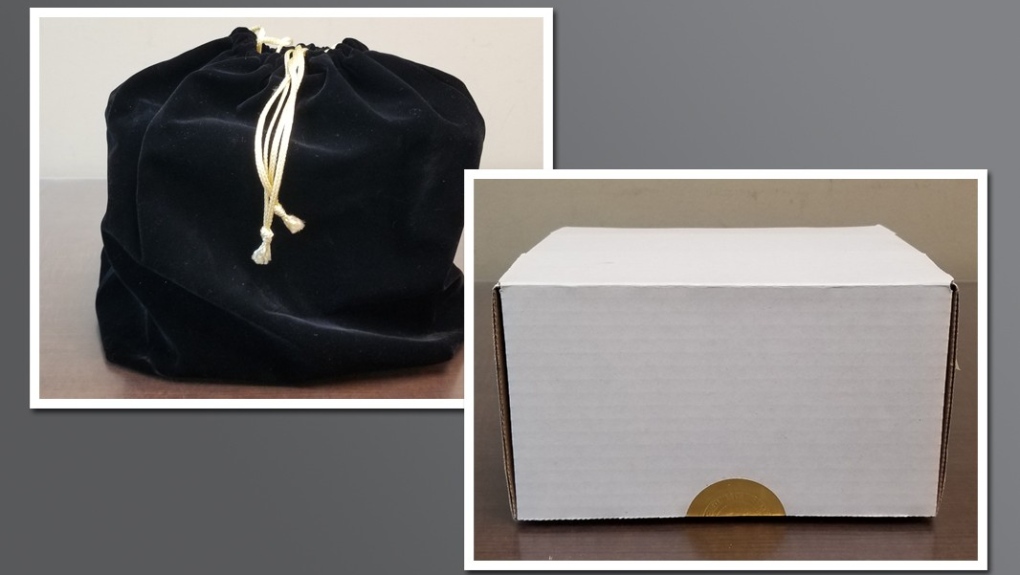 A pouch containing cremated human remains stolen from a home in Hamilton, Ont., this week has been returned. (Hamilton Police Service)

A pouch containing cremated remains stolen in a break-and-enter in Hamilton has been returned to a grieving family.

Heddle was about to ring the homeowner’s doorbell when she spotted the black pouch inside a larger bag on the front porch. "My heart was pounding when I saw the bag of ashes,” Heddle said. “I was like, really! The person saw it on the news or somebody told them and they were nice enough to return them."

Hamilton Police Const. Jerome Stuart said the return of the ashes was “the best news I've heard all day."

Police had previously released a photo of the black velvet pouch with gold strings, saying suspects had kicked in the front door before entering the home Wednesday and stealing three similar bags. Two of them contained coins, and one carried the cremated remains.

"They were in the same relative size range. And the weight, the ashes would be heavy enough that the person would think that it's just the same thing -- currency," said Stewart, suggesting the thieves likely didn't realize what they were stealing.

Heddle said the pouch contained her neighbour's mother's remains. She's glad the thieves did the "right thing," and believes a guilty conscience got the better of them.

"Thank you for returning [his] mom's ashes. That's amazing," Heddle said. "Now step up and return the rest of the stuff."

"The family is not in support of charges,” Stewart said. “Their concern was getting the remains back."

A #HamOnt family is looking to locate the remains of their loved one stolen in a break and enter on May 15, 2019. Please call (905)546-2921 if you have information that can help with the safe return. https://t.co/2uDXlMt8ZH pic.twitter.com/Z6nBug4XLu