The doors are shut at Ripley’s Aquarium of Canada, but the exhibits, water quality and marine life still need tending.

“It costs us a lot of money to maintain the building with zero revenue coming in,” said Peter Doyle, Ripley’s general manager.

The aquarium still employs one-fifth of its staff — about 50 people — despite being closed to the public. But along with many other tourist attractions, Ripley’s has been shutdown for 288 days since the pandemic began.

“The catastrophic consequences of the COVID-19 pandemic have hit every tourism business in every corner of our province,” said Chris Bloore, president and CEO of the Tourism Industry of Ontario.

Advocates say many of the losses to Ontario’s $36 billion tourism industry are due to the closure of the Canada-U.S. border, which has now been shutdown for 15 months.

“The industry has been crushed and we cannot afford to lose another summer tourist season,” said Beth Potter, president and CEO of the Tourism Industry Association of Canada. 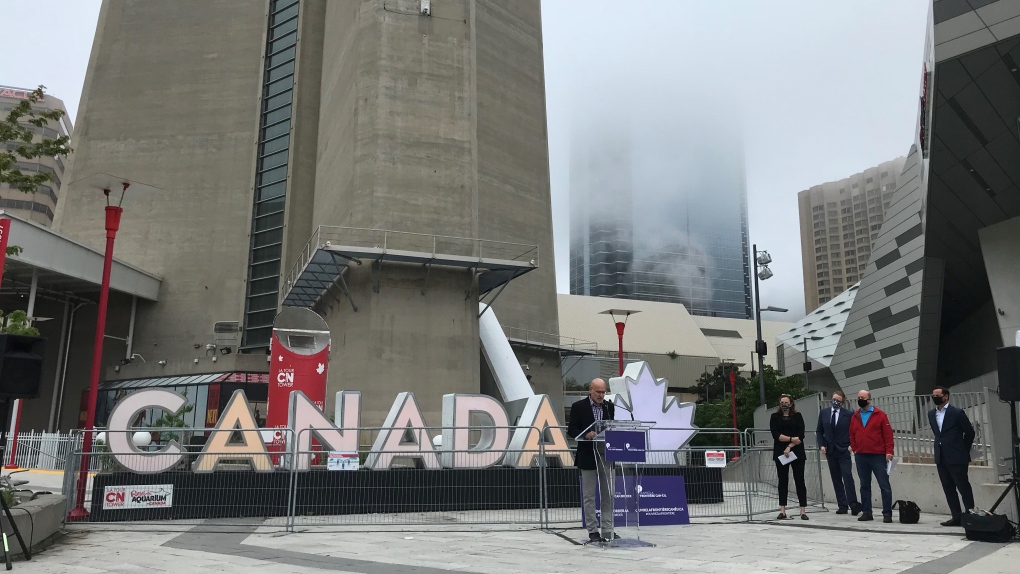 Tourism advocates speak about how hard the industry has been hit amidst the pandemic in Toronto on June 8, 2021.

On Monday, the prime minister hinted that the borders might soon be reopening to vaccinated travellers.

Prime Minister Justin Trudeau said he would work with the premiers “to make sure that opening doesn’t put anyone at risk, but also gives Canadians and Canadian tourism operators the best possible summer after a long, hard year.”

But the prime minister did not say when this could happen, which led the tourism industry to launch a campaign — calling on the federal, provincial and territorial governments to work together on a plan to reopen the border — and commit to a date.

“He keeps using the word soon. We’d like to know what the definition of soon is,” said Potter.

Doyle says he’s hopeful that the Aquarium will be able to resume operations in the not-too-distant future.

“We can reopen anyway the government dictates — we just want that ability to reopen when it is safe to do so,” he said.

But Doyle — along with other attraction operators — say they need some notice, to prepare for what’s to come.

After the overturning of Roe v. Wade by the U.S. Supreme Court, some LGBTQ2S+ couples are alarmed, worrying about a return to a time when they lacked equal rights to married heterosexual couples under the law. Many, fearful that their marital status is in danger, are moving now to square away potential medical, parental and estate issues.