The faces of Parkdale: Art installation to showcase the people behind the community 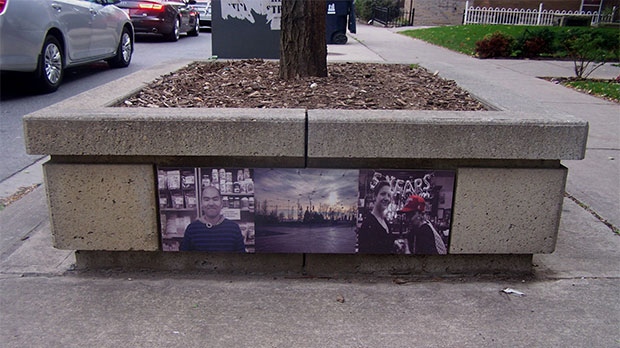 Parkdale artist Jim Bravo is rejuvenating the outdoor photo exhibit Jameson Ave Impressions, by replacing the old faded photos with new, colorful images of the people in the community.(Photo courtesy of Jim Bravo)

An art installation on the planters, once a reflection of the community’s pride, is now faded. More than 500 images showcasing residents, iconic landmarks and everyday scenes in the community are cracked or even missing.

But an upgrade is in the works.

Local Parkdale mural artist Jim Bravo, who participated in the initial project called Jameson Ave Impressions, has been working tirelessly to give the eight year old art installation a new lease on life after receiving an overwhelming amount of positive community push for a revamp.

“I’ve been campaigning to get it reinstalled because we got some new people living in the neighbourhood now,” Bravo said.

“I got a lot of queries from people who want to be a part of this one.”

The outdoor photo exhibit was installed in 2009 with the help of Bravo and photographer Kate Young. It consisted of more than 500 black and white photographs installed on the perimeter of the 72 tree planters that stretched along Jameson from Queen Street West to Springhurst Avenue.

For the past several weeks, Bravo set up a portrait booth at the Parkdale Library on Queen Street encouraging the community to come out and be a part of the project. He’s been snapping pictures of families and residents young and old who either live or work in Parkdale.

Bravo told CTV News Toronto for this version of the installation all the images that will appear on the planters will be printed on aluminium and then installed on the planters to ensure its longevity.

So far he’s collected about 200 portraits but he still needs another 200 for the planters that will host about six images each. Bravo is aiming to have all the images he needs by Nov.15 with plans to install the images on the planters next month, weather permitting. Otherwise the artwork will have to wait until spring of 2018 to be installed.

“I plan to include people who make up the community or keep the community going in a positive way. The focus is definitely the main hub which is south Parkdale, which is where the more marginalized communities exist,” Bravo said.

“It could be Parkdale legends, a person, a restaurant, a bus stop, a laneway or a house. The idea is to keep it authentic in the face of change.”

As an homage to the initial installation Bravo told CTV News Toronto he also plans to include some of the original images on a couple of “dedication planters” to honour some of the people the community has lost over the years.

The project continues to be funded by the City of Toronto’s Beautiful Streets Program, but it’s also getting some moral support from the local Business Improvement Area team. Executive director Anna Bartula, who is familiar with Bravo’s work in the community, helped him spread the word about the community’s beloved planter art getting a makeover.

“It’s such a unique project and it’s such a relevant project to the community right now, especially for Jameson. It will be filled with images of people that live in the neighbourhood. It just offers such a deeper significance,” Bartula explained to CTV News Toronto.

“We have a lot of voices in community, I think what this project does is it gives people a face. It reminds people that these are the faces of our community. It’s what’s beautiful about this project. People get the chance to see themselves and see their neighbours.”

Although the art installation doesn’t have a theme, said Bravo, the essence of the original installation will remain.

“The whole thing was put together initially to celebrate how people usually land in a place like Parkdale, where there’s usually low rent so they can get started,” Bravo explained.

Bravo added that the images will focus on what he calls “hardcore Parkdale,” without excluding the new wave of residents that have come to call the neighbourhood home.

“We’re getting right to the heart of the community. We’re not focusing on the new gentrified aspect of it. We’re going into the rough zones because that’s still Parkdale,” Bravo said.