TORONTO -- Police are searching for a suspect after the 34-year-old father of a newborn baby was stabbed to death outside of his Hamilton home late Thursday night.

The victim, identified by police as Michael Gallo, was found suffering from stab wounds in the backyard of his home in the area of Main Street and Haddon Avenue at around 10 p.m.

According to investigators, Gallo had been running errands in the area and had just returned to his residence when he was stabbed.

Police said he was alone suffering from critical injuries in his backyard when he was discovered by his fiancé, who was inside with other people at the time.

Despite life-saving efforts by both civilians and paramedics, Gallo was pronounced dead in hospital a short time later.

Speaking to reporters on Friday morning, Det.-Sgt. Jim Callender said the victim had recently become a father to a son, who is about a month old. 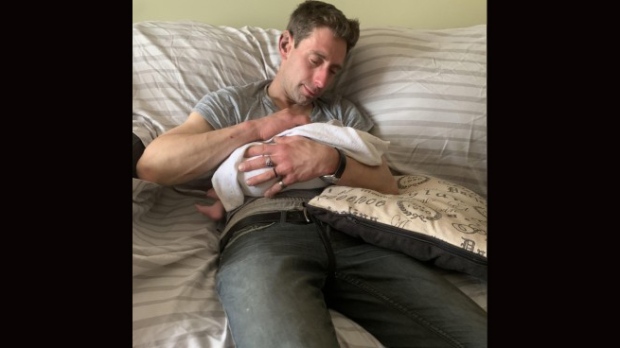 “We are looking into the circumstances of what happened prior to that stabbing,” Callender said.

Police are currently searching for a male who was seen in the area at the time of the incident.

“We do have an individual who we are looking to speak with that was seen in the area at around that time,” Callender said, adding that the person is not considered to be a suspect.

He is described by police as about five-foot-nine with a skinny build. He was wearing a black and grey hoodie, dark athletic pants, and a blue mask.

“Currently we have our forensic unit there, they are processing the scene,” Callender said.

Police are also canvassing the area for any potential witnesses.

Callender said anyone in the neighbourhood who spotted anything unusual last night should reach out to the Hamilton Police Service.

The murder weapon has not yet been recovered, he said.