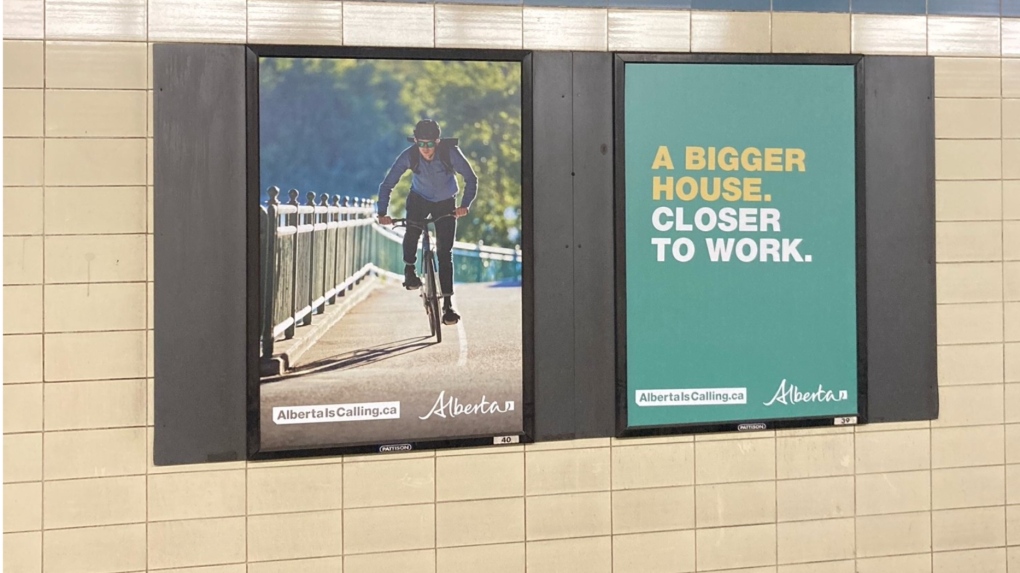 An advertisement is displayed at a subway station in Toronto (Shoshanna Saxe).

A series of billboards at one of Toronto’s busiest subway stations is directly targeting the frustrations of young people living in the city by offering an alternative – Alberta.

“A bigger house. Closer to work,” one billboard at Yonge-Bloor station reads with a parallel image of a cyclist. Another says, “An engineer, accountant and plumber walk into a province. They all get jobs.”

At the bottom of each billboard, the tagline, “Alberta is calling,” nudges at a solution to these problems.

This new ad campaign is part of a $2.6 million ploy designed by the Alberta government to lure people from Toronto.

Earlier this week, Alberta Premier Jason Kenney made a trip to downtown Toronto to drive that message home.

“There is a place in this country where you can afford to buy a home,” Kenney said. “That place is called Alberta.”

The ads at Yonge-Bloor station enticing Torontonians to move to Alberta are well targeted. They subtly poke at what’s ailing here. We need to act on these already! The frustration of young people in Toronto is palpable. pic.twitter.com/3fbu5QfjYS

“It felt like a commentary about Toronto from an unusual source that some things here have gone very wrong,” Shoshanna Saxe told CTV News Toronto after noticing the ads while travelling through Yonge-Bloor station.

As an associate professor in civil engineering at the University of Toronto with an expertise in urban infrastructure, she was keenly aware of the targeted messaging surrounding housing and transit in Toronto.

“It was putting a finger right on the key challenges Toronto is facing,” she said.

Videos on the Alberta is Calling website take the message a step further.

“My name is Alycia. I live in Calgary, Alberta. I moved here from Toronto three years ago,” a young mother says in one advertisement while her two children happily play in their backyard.

“The cost of housing in Toronto is astronomical,” she goes on to say as she sits in a modern house with light flooding in and ample room for her kids to run around.

“It’s honestly night and day what we have. Now I couldn’t imagine living anywhere else.”

In another video, Natasha reassures Torontonians who are hesitant about making the move.

“The pieces that I was thinking I was going to have to leave behind in Toronto, I’ve found them here as well,” she said.

“It’s really rewarding as a young person to make your own life and build your own community and find your own interests.”

Saxe said these ads are working to re-brand Alberta, venturing away from common associations with the province, like trucks and oil, and instead, gravitating towards biking and exploration.

“As a city, we want Toronto to be saying we see you, we’re going to work on that,” she said.

Have you moved from Ontario to Alberta? We'd like to hear from you.

To tell your story, send us an e-mail here.