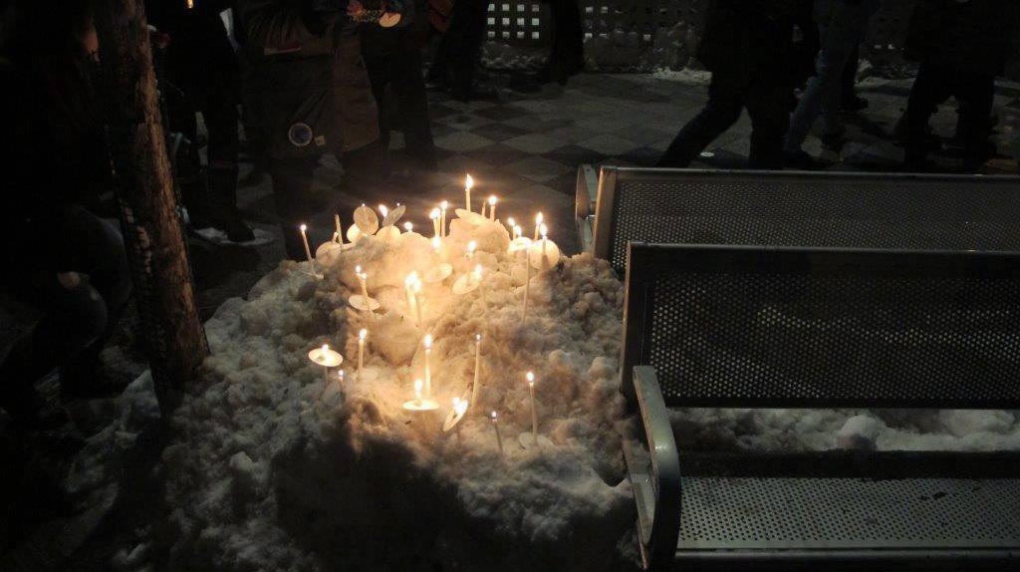 In this Feb. 13, 2018 photo, candles sit in a snow bank, as part of a makeshift memorial for the victims of alleged serial killer Bruce McArthur in Toronto, Canada. (AP Photo/Rob Gillies)

TORONTO -- Organizers of a concert billed as "part vigil, part celebration" in the wake of the arrest of an alleged serial killer have responded to some of the concerns raised by members of Toronto's LGBTQ community.

LoveWins is a free music event planned for March 29 at Nathan Phillips Square, with a lineup that features Carole Pope and members of the Barenaked Ladies, the Forte Toronto Gay Men's Chorus and winners of CTV's "The Launch" music competition series.

Critics say the plans are tone deaf regarding what's actually happening in Toronto's LGBTQ community, as police continue to seek answers about a man who allegedly targeted gay men in the city for years.

Bruce McArthur, a 66-year-old self-employed landscaper, has been charged with six counts of first-degree murder. All of his alleged victims had ties to the city's gay village.

A poster promoting the concert had been taken down from the LoveWins Facebook page as of Thursday night. It didn't mention McArthur by name but referenced "the series of killings that have rocked Toronto's LGBTQ community." Other performers in the lineup include American R&B singer Thelma Houston, former Nylons member Billy Newton Davis and "Canadian Idol" winner Theo Tams.

A number of sponsors were also named, including Scotiabank, Labatt, CBC and Bell Media, owner of CTV.

Plans for the event featuring a roster of known faces misses the mark for Toronto resident Jordan Pedde.

"It just feels like a giant corporate, political cachet on a grieving community," he said.

"There's definitely room for there to be something uplifting for the community, and some sort of gathering, but people are still in the grieving stages."

In a number of posts that have been deleted from the event's page, other Facebook users questioned several aspects of the concert, including why it appears few members of the local community were consulted or asked to perform.

They also suggested the organizers' description of the event, which calls it an evening when "the work of healing now begins," ignores that many questions about the killings remain unanswered.

Salah Bachir, co-organizer of LoveWins, said "a lot of people in the community" were looking for an event that emphasized its "strength and compassion." He said he didn't expect a negative reaction from some groups.

"There was so much that was going on, people were in shock and grieving, and we needed something that was uplifting as a community kind of thing, in light of all the murders," he said in a phone interview.

"There have been a couple different vigils and people have left them more depressed than ever."

The 62-year-old, who heads movie exhibitor Cineplex's media division, said he knew several of the murdered men. He downplayed social media criticism of the event.

"There's a lot of young people that are angry -- angry at the police, angry at the city, angry at the mishandling of stuff -- and I think venting their anger. Yeah, I enjoyed reading them," he said of the deleted Facebook posts.

Toronto city Coun. Kristyn Wong-Tam, whose ward includes the gay village and who was involved in coming up with the concept for the event, said she disagrees with suggestions the concert is ill-timed.

"The criminal proceedings and the legal case will take years to unpack," she said.

"I can hear that people might say that it's too soon, but for some members of the community it's not soon enough. They're sitting by themselves and wondering where do they place their grief and who's going to bring them together?...In many ways, this concert is an effort to try and respond to community members who were saying they're feeling very much alone."

"It was never meant to be (anything) ... other than a space of healing," she said.

"I think it's going to be a beautiful and transformative concert. It'll give us a chance to come together to grieve and sing."

Mayor John Tory voiced his support for the event Thursday on Twitter, saying it offers an opportunity to "come together in healing and strength."

"We must unite to support each other during these difficult times," he wrote.

Sara Malabar, who founded a "Stop .LoveWins Concert" page on Facebook, said she's willing to reconsider her protest if family or friends of the victims were to support the concert.

She hasn't seen any evidence of that so far.

"Our dead are still in forensic labs, some of them don't have names, some of them may not even be found yet. It's just way too soon for people to come together to 'celebrate' anything," she said, noting that a number of her gay male friends are still deeply traumatized by the case.

"Instead of trying to throw some sort of 'Let's feel better' concert, maybe we need to be coming together in our grief in respectful ways and working through the trauma.

"As long as it's just trying to make people feel better about a horrifying situation, that's not good enough for me."