Speed a factor in motorcyclist's death on DVP 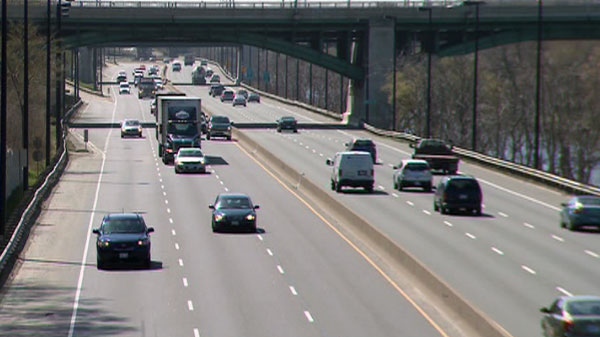 The Don Valley Parkway is being shut on April 14, 2012, for spring maintenance.

A man driving a green Kawasaki motorcycle died Friday after a collision on the Don Valley Parkway north of the Gerrard Street Bridge.

The collision occurred at about 2:45 p.m. when the speeding 37-year-old man lost control of his bike and it careened into a guard rail on the east side of the road.

Police said the driver was thrown from this motorcycle and landed on the grassy shoulder of the highway.

The northbound DVP remained open after the crash, but was restricted to one lane of traffic from Dundas Street to just south of the Bloor viaduct as police investigated.

During rush hour, traffic was backed up along the Gardiner Expressway all the way to the Air Canada Centre as drivers waited to turn onto the DVP.

Police said they are looking for witnesses to the motorcycle crash, including the driver of a black sedan, who may have seen what happened.

Police are asking anyone with information to contact traffic services at 416-808-1900.