A Toronto police officer fatally shot inside a Mississauga coffee shop Monday afternoon is being remembered as a “gentle giant,” a “larger than life” person whose positive presence was felt before he even entered a room.

Const. Andrew Hong, a 22-year veteran of the Toronto police force, was shot and killed in an "ambush attack." He was 48.

Hong is survived by his wife, two teenage children and his parents.

Hong, who was a member of Toronto police’s Traffic Services Unit – Traffic Motor Squad, was one of two people gunned down in a GTA shooting spree Monday afternoon involving the same suspect.

The shooter, who has yet to be identified, was called “armed and dangerous” in a police-issued emergency active shooter alert. The shooter died following an interaction with Halton police at a Hamilton cemetery.

Hong was in Mississauga for a joint training exercise with members of Toronto and York regional police forces. He’d reportedly stopped at a Tim Hortons for lunch around 2:15 p.m. where he was fatally shot at close range in what Peel police Chief Nishan Duraiappah described as an “ambush attack.” Hong died at the scene.

n a family statement released Tuesday evening through the police union, Hong’s family said his absence “has left a gaping hole” in the hearts of all who knew him.

“We are grateful for the outpouring of support. Andrew was magnetic. He was a man of steel on the outside, with a warm teddy bear personality on the inside. His personality was larger than life,” the statement read.

The family said he was a practical joker who got along with everyone.

“He loved his Police family and was so proud to be a member of the Toronto Police Service, and especially loved being a part of the Motor Unit,” the statement read.

The family said they are “overwhelmed” with the outpouring of love and support and asked for privacy as they grieve. 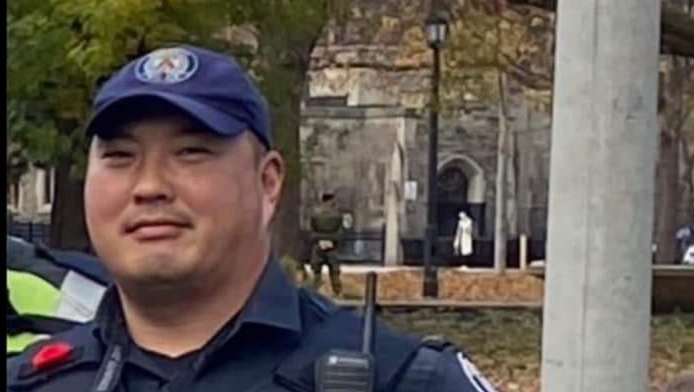 Andrew Hong, 48, is seen in this undated photograph.

“Andrew was a big boy with a big heart, a huge heart,” Insp. Matt Moyer, who is acting superintendent of Traffic Services, told CP24 on Tuesday afternoon. “I have known him for a while and he always had this great way of coming and asking for a favour that was unrealistic. ‘Boss, we need this, we need that. I know our budget is tight but we need this or we need that’ and then he would walk away just expecting it would happen. He was a sweetheart and he had a big personality. Big personalities are hard to replace in our business.”

Numerous officers who spoke with CP24 on Tuesday said that they would often refer to the six-foot-four Hong as “Honger” around Traffic Services, noting that it was a term of term endearment for a colleague who was much loved.

Speaking with CP24, his voice breaking, Moyer said that Traffic Services is a “different building today” following Hong’s senseless death but he said that “is understandable" given the magnitude of the loss being experienced.

“Today is Tuesday, it is a very tough day. I think Wednesday will be a little less tough and I am hoping Thursday the sun is out,” he said. “As far as I am concerned it is business as usual and I know Andrew would not want it any other way.”

Hong is being fondly remembered by colleagues today for his wit and his heart, with one former superintendent telling CP24 that his death will leave "an incredible emptiness" at Traffic Services.

“Andrew was larger than life. Physically he was larger than life and his personality was in the room before he was. … We had a lot of laughs,” he told CP24 Monday night shortly after a gathering with hundreds of colleagues to pay respects to Hong before his body was taken to the Forensic Services and Coroner’s Complex at Keele and Wilson Streets in North York.

Pegg said Hong was a police officer whose dedication to the job was “unwavering.” He called him “brave beyond description.”

“To see something like this happen in our city to people I love and care about, there are no words for that,” said Pegg, who called the killing “an unspeakable thing.”

“Our hearts are broken.” 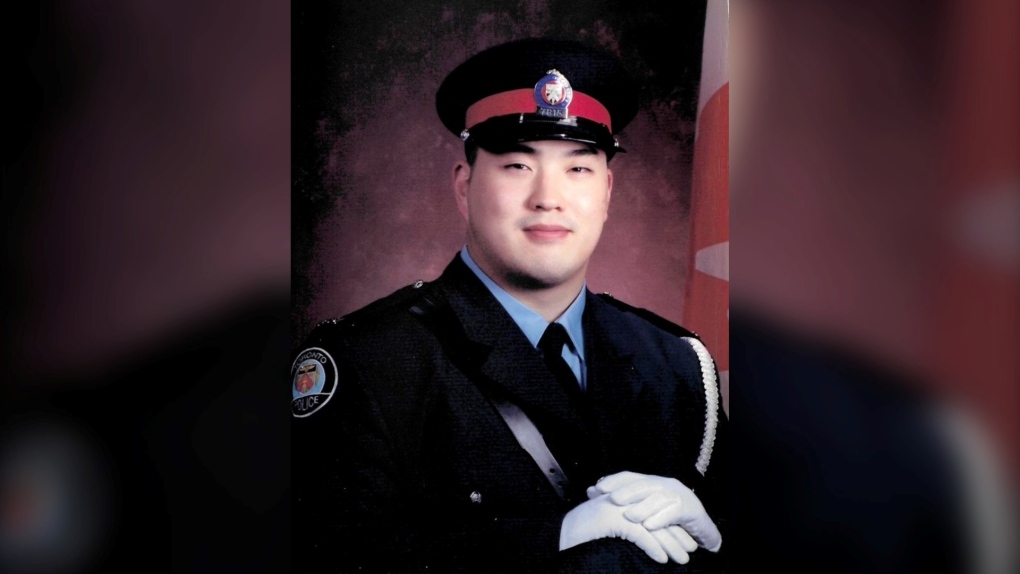 Andrew Hong is shown at the time of his graduation from the Ontario Police College in this photo released by the Toronto Police Service on Tuesday.

“It is with a profound sadness that I announced the death of Toronto Police Service constable Andrew Hong, of Traffic Services,” he said during a press conference.

Calling Hong a “husband, father, and son,” Ramer said he’s committed to the slain officer’s family that they will have the “full support of the Toronto Police Service every day going forward.”

“This is devastating news for his family and for all members of the Toronto Police Service and our entire policing community. We will lean on each other while we work to support Constable Hong’s family and each other in our grief,” he said.

Toronto Mayor John Tory said the death of the officer is “profoundly sad,” adding it was evident that Hong was a “beloved” colleague, which he witnessed first hand Monday evening as many officers from Traffic Services had “tears streaming down (their) faces.”

“(Hong) was somebody that meant a lot to them” he said, adding police officers, while not perfect, “get up every morning and they put on a uniform, and they go out into potentially in harm's way.”

“This is one of those kinds of things that just breaks your heart.”

Tory had met the fallen officer personally during the pandemic when he did some security work and called him a “gentle giant of a man.”

“Everybody who met him liked him,” he said.

Funeral arrangements for Hong are still in the works at this time.

Parents can apply with the Canada Revenue Agency starting today to receive the children's dental benefit that the federal Liberals say is intended to provide cost-of-living relief to low-income Canadians but that critics say is a drop in the bucket.

A top European Union official warned Elon Musk on Wednesday that Twitter needs to beef up measures to protect users from hate speech, misinformation and other harmful content to avoid violating new rules that threaten tech giants with big fines or even a ban in the 27-nation bloc.

Eligible Canadians can now apply for the new federal dental benefit, Canada plays its final men's World Cup match, and Christine McVie of Fleetwood Mac dies at 79. Here's what you need to know to start your day.