TORONTO -- New surveillance footage has surfaced of a shocking gunfight in Toronto on Tuesday morning in which at least 80 shots were fired.

Police were called to Eighth Street, south of Lakeshore Bouelvard West at 4:30 a.m. Tuesday for numerous reports of shots fired outside an illegal after hours establishment.

A resident who identified himself as Patrick told CP24 he heard more gunshots than he could count, as suspects in at least two vehicles opened fire on one another.

One man was struck as a result and suffered serious but non-life-threatening injuries. 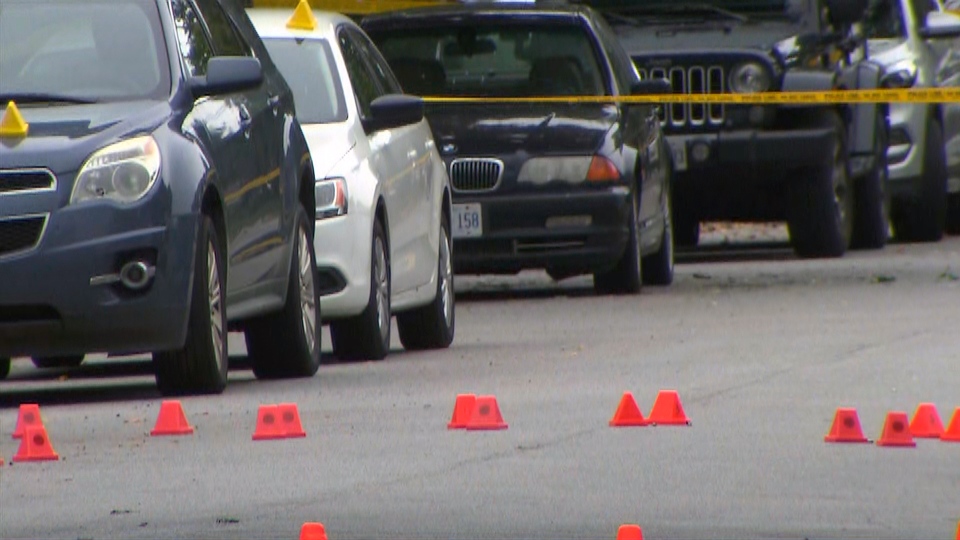 He has since been released from hospital.

The footage, obtained by CTV News Toronto on Wednesday, does not capture the shooting itself but the gunshots can be heard in the background.

In the footage an initial volley of at least two dozen gunshots is heard, at which point three individuals come into the shot.

The individuals then get up and go around a corner, disappearing out of the shot again. At that point another volley of at least a few dozen more gunshots is heard before a car speeds off.

On Wednesday, bullet holes could still be found in cars parked nearby.

Police told CP24 they found so many shell casings they ran out of plastic evidence markers to cover them with, and were forced to improvise.

Neighbours say the illegal booze can has been operating off an alleyway south and parallel to Lakeshore Boulevard for about a week.

The organizer of the Monday event at the venue told CP24 that the bar was rented for a gender reveal party.

Ward councillor Mark Grimes told CP24 he has been in touch with police, firefighters and bylaw enforcement regarding the booze can.