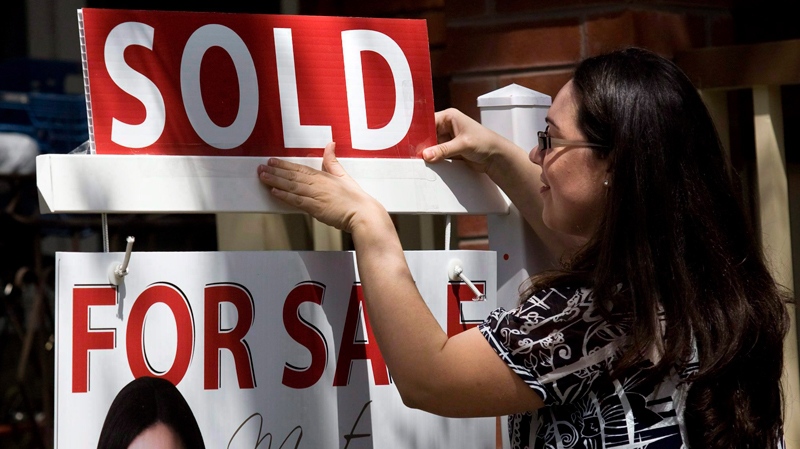 A real estate agent puts up a 'sold' sign in front of a house in Toronto Tuesday, April 20, 2010. (Darren Calabrese / THE CANADIAN PRESS)

OTTAWA - The Canadian Real Estate Association says Canada's home prices continued to rise last month and a majority of the country's local markets showed a balance between supply and demand, including in Toronto.

The national average price for Canadian home resales was $372,700 in June, up 8.7 per cent from the same month last year as the number of sales increased.

The Canadian Real Estate Association said Friday its members sold 10.8 per cent more homes last month compared with June 2010. June's sales activity was also 2.6 per cent higher than in May.

CREA says 60 per cent of local housing markets in Canada were balanced in June -- meaning the number of sales and new listings were about the same.

He also noted that trends in local housing markets often differ from the national statistics.

CREA noted that national figures in June showed less of an impact from the sales of high-priced homes in Vancouver, although that city continued to skew the national results.

Activity in Toronto was described as stable in June while it declined slightly in Vancouver and the Fraser Valley area of British Columbia.

Calgary, Montreal, Ottawa, Hamilton, London, Ont., and Victoria all saw gains over May.

Nevertheless, national sales activity in the second quarter (April, May and June) was down 4.5 per cent compared with the first quarter of 2011.

CREA attributed the decline from the first quarter to new mortgage rules announced in January and implemented at the end of March and an increase in mortgage rates in April and May.

CREA's monthly report comes ahead of Tuesday's Bank of Canada announcement on its target overnight interest rates. The central bank is widely expected to keep the key rate unchanged at 1.0 per cent, where it has been since September.

Earlier in the year, economists had expected the Bank of Canada would begin raising its short-term rate to quell inflation. However, sentiment has changed amid signs that the U.S. economic growth has been less robust than expected.

In contrast with the United States, Canada's job growth has been stronger, its federal government is making more headway in dealing with budget deficits and its resource exports are relatively strong -- putting home buyers in good shape.