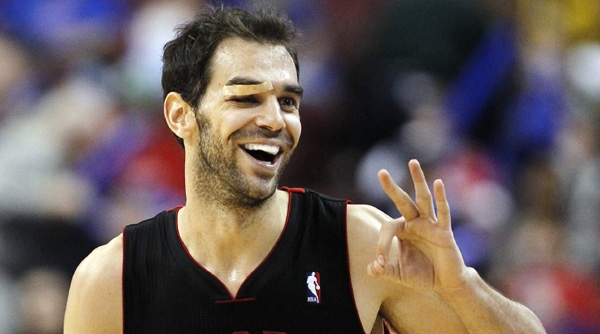 Toronto Raptors point guard Jose Calderon, of Spain, reacts after hitting a 3-pointer in the second half of an NBA basketball game against the Philadelphia 76ers, Wednesday, April 4, 2012, in Philadelphia. The Raptors won 99-78. (AP Photo/Alex Brandon)

PHILADELPHIA - Andrea Bargnani scored 24 points and DeMar DeRozan had 18 to lead the Toronto Raptors to their third straight win, 99-78 over the Philadelphia 76ers on Wednesday night.

Back in January, the Sixers thumped Toronto 97-62 en route to a sizzling 20-9 start. Those days are over for the fading franchise. Elton Brand and Jrue Holiday had 20 points in Philadelphia's eighth loss in the last 12 games. The Sixers have lost their grip on first place in the Atlantic Division -- and are in danger of losing a spot in the Eastern Conference playoffs.

The good times are gone in Philadelphia and the sub-.500 Raptors were the latest team to roll over the Sixers.

Both teams played the night before, but while the Raptors beat Charlotte, the Sixers lost a tough one in Miami.

Bargnani's soft mid-range jumper stretched Toronto's lead to 11 points and the Raptors were on their way to their ninth road win this season.

The Raptors had opened up the game on 3s in the third. Alan Anderson snapped a tie game with one to make it 65-62 and Bargnani hit one as part of a rare four-point play for a 73-66 lead. The Raptors took an eight-point lead in the fourth and squashed a Sixers team devoid of the fun and sweet shooting that was so much a part of their mid-winter romp.

Andre Iguodala left Tuesday's game against Miami with a left eye bruise and wore protective goggles in the first half against the Raptors. He was scoreless and ditched them at the break. He wasn't much better without them, scoring six points. He was booed when he fired up an airball late in the fourth.

Igudoala has never really been embraced by the fans and didn't help the relationship when he told Sports Illustrated: "In Philly, it's not about who you are, it's about what you do for us.

"You could be the worst person in the world, but if you score a lot of points or win a championship, you can murder somebody."

Iguodala didn't talk before the game. Coach Doug Collins brushed off the comments.

"With Dre, he's just not a guy who's going to say a lot of warm and fuzzy things," he said. "That's just not what he does."

He didn't do much of anything in the first half. Holiday made his first eight shots for the Sixers, a run that included a 3 to end the first half for a 56-55 lead.

Bargnani scored seven points in third and was aided by a strong effort out of Aaron Gray was enough to give the Raptors and rare winning streak.

Jose Calderon briefly left after Brand accidentally elbowed him in the right eye. Calderon returned with his eye bandaged -- and nailed a 3 late in the fourth. He had 12 points and 13 assists. Ed Davis grabbed 14 rebounds.