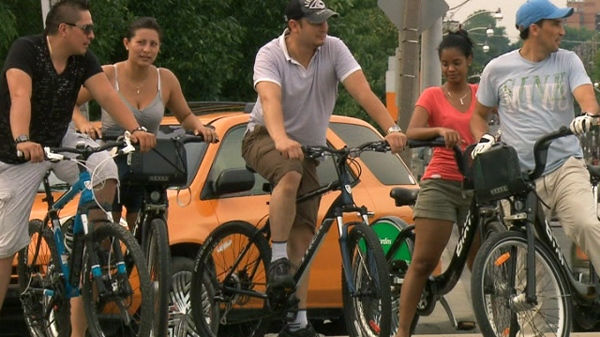 Under Manitoba's new helmet law, riders will be required by law to wear head protection.

TORONTO - The Ontario Medical Association is calling for the province to test new drivers on how they handle a machine-powered vehicle around people-powered bicycles before getting their licence.

That's one of the recommendations in a new report on bike safety released by the group Wednesday.

The report says that with 26,000 cycling-related emergency room visits in 2009, it's time planners in the province made bike safety a priority.

They're calling on Queen's Park to add a section on car-bicycle interaction to the driver training manual, and say the province should create a wide-ranging bicycling policy and get direct funding rolling to help lay down more bike infrastructure.

The report says less densely populated rural and suburban areas can do more to accommodate cyclists. For example, paved shoulders could be added to rural roads to give bicycles a buffer from traffic.

"Cycling is a great a way to stay fit and a way for people of all ages to add essential physical activity to their daily lives and improve their health" said Dr. Stewart Kennedy, president of the OMA, which represents physicians in the province.

"The debate about bicycle infrastructure is so often politically driven, but should really be about the health of the population and safety of those who choose to cycle."