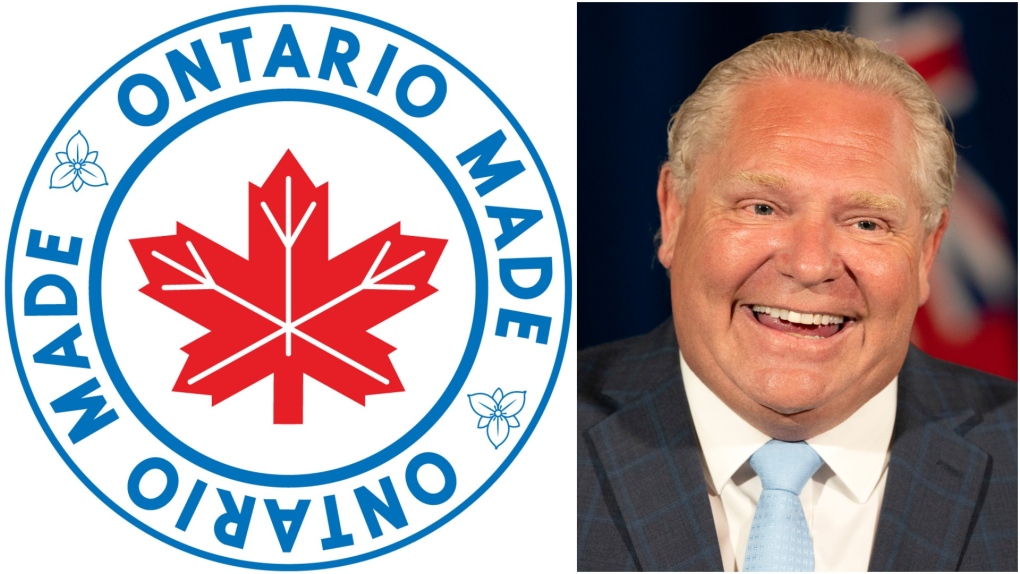 The province has launched a new program aimed at supporting locally-made products as Ontario begins to restart its economy. (The Government of Ontario and The Canadian Press/Frank Gunn)

TORONTO -- The province has launched a new program aimed at promoting locally-made products as Ontario begins its journey towards economic recovery.

Premier Doug Ford announced the "Ontario Made" program during a news conference on Friday saying the initiative would help residents better identify products made in the province.

“As we fight to get through the economic downturn, now more than ever, we need to support our own,” Ford said. “We can’t forget that as a province our collective buying power is massive. We generate 40 per cent of the Canadian economy. We are titans of industry – and I know that every Ontarian is proud of what we do.”

The $500,000 in funding for the campaign would come from the $50 million Ontario Together Fund, which was launched in April. The highlight of the program is the creation of a ‘Ontario Made’ logo that manufacturers can use to identify their made-in-Ontario products.

Developed by the Canadian Manufacturers & Exporters, the province says that the organization will meet with major Ontario retailers to promote the program in their stores as well as increasing visibility for customers.

Additionally, the launch of the program will include a new online portal which will connect consumers and supply chain partners to manufacturers of products made within the province.

“Ontario is Canada’s economic engine and workshop and our quality is second to none,” said Minister of Economic Development Vic Fedeli.

“This [program] will help in Ontario and beyond. We all have a role to play and we thank the CME for leading this important initiative,” Fideli added.

The announcement comes as Ontario works to restart the economy following months of closure as a result of the COVID-19 pandemic.

Now more than ever we need to support our own.

The Ontario Made logo will help consumers make choices that supports our local economy.

The province is currently in Stage 2 of the government's restart plan, dubbed “A Framework for Reopening our Province." On Friday, Canada’s national statistics agency reported an increase in Ontario’s employment for the first time since the pandemic was declared.

On Monday, Ontario’s minister of health says the government is considering moving into Stage 3 of the provincial reopening plan “as soon as we possibly can” while her team reviews the data on COVID-19 growth in the province. That move would see a further relaxing of public health restrictions on public gatherings, as well as reopening all workplaces.