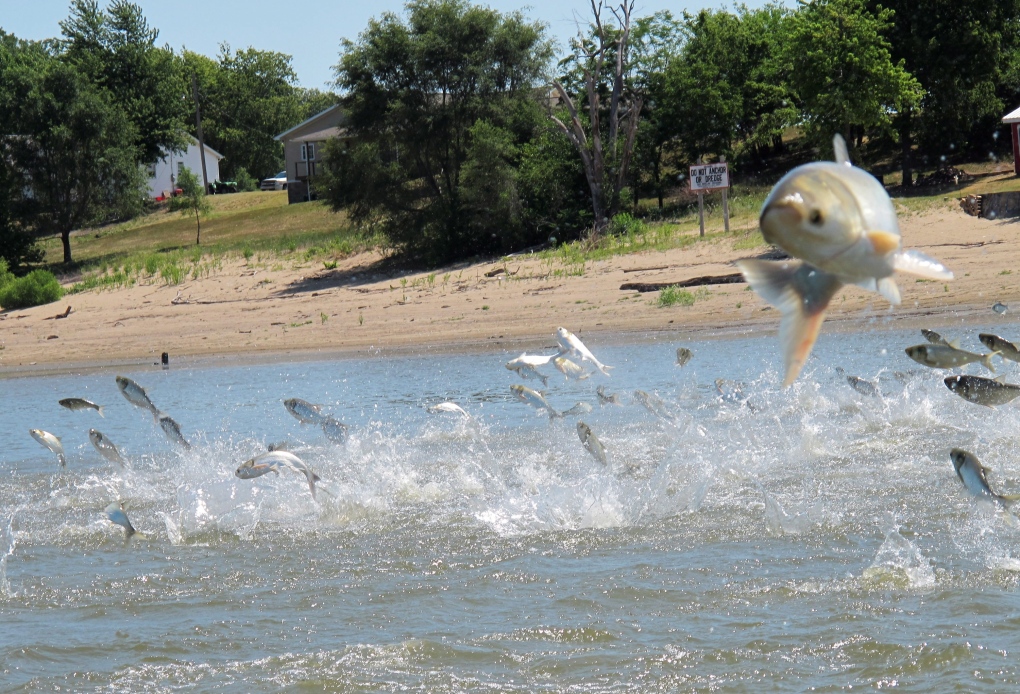 In this June 13, 2012 photo an Asian carp, jolted by an electric current from a research boat, jumps from the Illinois River near Havana, Ill., during a study on the fish's population. (AP Photo/John Flesher, File)

TRAVERSE CITY, Mich. -- The debate over how to protect the Great Lakes from voracious Asian carp appeared no closer to settlement Tuesday following release of a federal report with options that could cost billions and require extensive re-engineering of Chicago's busy waterway network.

Wrapping up a study that began in 2009, the U.S. Army Corps of Engineers put forward eight options for preventing the carp and other invasive species from slipping between the Great Lakes and Mississippi River watersheds. The choices range from doing nothing new to undertaking massive construction projects to separate the two systems.

Government officials, scientists and advocacy groups agree on the need for fast action to prevent bighead and silver carp from gaining a foothold in the Great Lakes, where they could destabilize ecosystems and a $7 billion fishing industry. The federal government has spent about $200 million on interim measures such as operating an electric fish barrier in a Chicago-area shipping canal linking Lake Michigan to the carp-infested Illinois River, a tributary of the Mississippi.

But most of the long-term strategies in the Army Corps' report issued Monday would require 10 to 25 years to complete. And there were no signs that the region's competing interests would coalesce behind one approach and work together to pay for it.

Environmental groups continued to press for complete physical separation of the watersheds, while groups representing cargo shippers and businesses in the Chicago area remained staunchly opposed. Statements from members of the region's congressional delegation reflected those divisions.

The parties involved don't even agree on what the next step should be.

The Army Corps prepared for a public meeting Thursday in Chicago, the first of seven it will host across the region this month to explain the report and get feedback. But project manager Dave Wethington told The Associated Press the Corps would take no further action without direction from Congress, unless some other agency or organization offers to fund additional study of one or more options in the document.

"The Corps believes we met the intent of congressional legislation" that kicked off the study and a follow-up 2012 measure that set a deadline for completing it, Wethington said. "What we hope to do now is present the technical information, answer any lingering questions and receive input from the public as part of a record that we can provide to the decision-makers to help them make a choice."

But Sen. Debbie Stabenow and Rep. Dave Camp of Michigan, who sponsored the 2012 bill, said they'd hoped the Corps would recommend one course of action and provide a fully developed blueprint for achieving it.

"These options they have provided are nowhere near what they need to be in order for Congress to act on them," said Stabenow spokesman Cullen Schwarz. "The next step is the Corps needs to continue its work and more fully develop their proposals so we can act."

In a phone conference, leaders of environmental groups said the report should provide momentum for total watershed separation, at a cost of $15 billion to $18 billion.

"For the first time, we have ... serious federal consideration of separation of the Great Lakes and the Mississippi River on the table," said Joel Brammeier, president of the Alliance for the Great Lakes.

Mark Biel, chairman of a Chicago business coalition called UnLock Our Jobs, said the report "clearly indicates that physical separation is too expensive, too slow and too uncertain to be a viable solution to the spread of invasive species."