TORONTO -- Ontario’s police watchdog says there are no reasonable grounds to lay charges in connection with the death of Regis Korchinski-Paquet, a 29-year-old woman who fell to her death from a 24th-floor Toronto balcony while police were in her apartment three months ago.

On May 27 at approximately 5:15 p.m., officers were called to the apartment building in Toronto’s High Park neighbourhood.

Korchinski-Paquet died shortly after officers arrived at her apartment that night. Her family had indicated that she was suffering from a mental health crisis in the moments leading up to her death.

Her mother told reporters that she called police in the hopes that officers would defuse the situation and take her daughter to the Centre for Addiction and Mental Health (CAMH).

Following an investigation, which included the review of scene photos, 911 call recordings and security camera video from the area, the director of the Special Investigations Unit, Joseph Martino, released his decision on Wednesday afternoon.

“On my review of the evidence, there are no reasonable grounds to believe that any of the officers committed a criminal offence in connection with Ms. Korchinski-Paquet’s death,” Martino said in a video statement posted to Youtube.

Martino acknowledged that typically, the director of the SIU does not personally deliver the results of an investigation when no charges are laid. However, Martino said that the SIU recognizes that this is not “an ordinary occasion,” given the “incredible” public interest and attention the case has generated.

"There were allegations in the wake of Ms. Korchinski-Paquet’s death that she was pushed off the balcony by the police. The evidence establishes that this did not occur," Martino said.

"Instead, the evidence indicates that no one other than Ms. Korchinski-Paquet was on the balcony when she scaled over the railing and attempted to sidestep along the outer ledge over to her neighbour's balcony, lost her balance and fell."

In the days and weeks following her death protests were held in Toronto calling for changes to the way police officers respond to mental health crises. 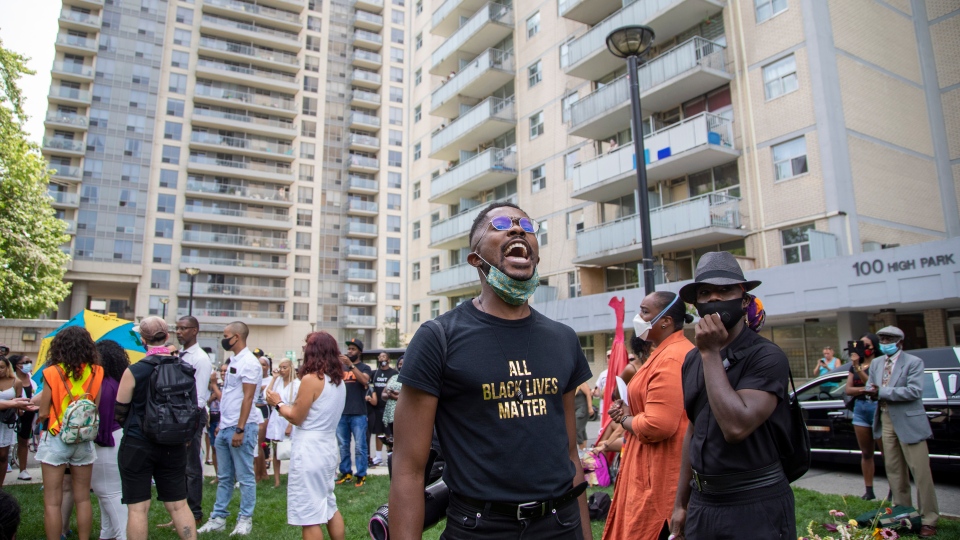 Martino added that while there was no evidence of police wrongdoing or "overt" racism in the incident itself, race may have been a factor in the events leading up to the death of the 29-year-old, who was both Indigenous and Black.

However, Martino said that examining systemic issues in policing is not his role.

"The task before me was a narrow one -- namely, to determine whether there were reasonable grounds, on the evidence collected by the SIU, to believe that any one or more of the officers who responded to Ms. Korchinski-Paquet's apartment committed a criminal offence in connection with her death," he wrote.

‘No win in this tragic situation’ Toronto’s interim police chief

Toronto’s interim police chief James Ramer addressed the SIU report at a news conference hours after its release in which he said that there is no ‘win’ in this tragic situation for anybody.”

“A young woman lost her life. Her family lost their daughter, sister and cousin - and the Service, again, offers its deepest sympathies,” Ramer said. “This is a profound event for the officers involved and for the Toronto Police Service.” 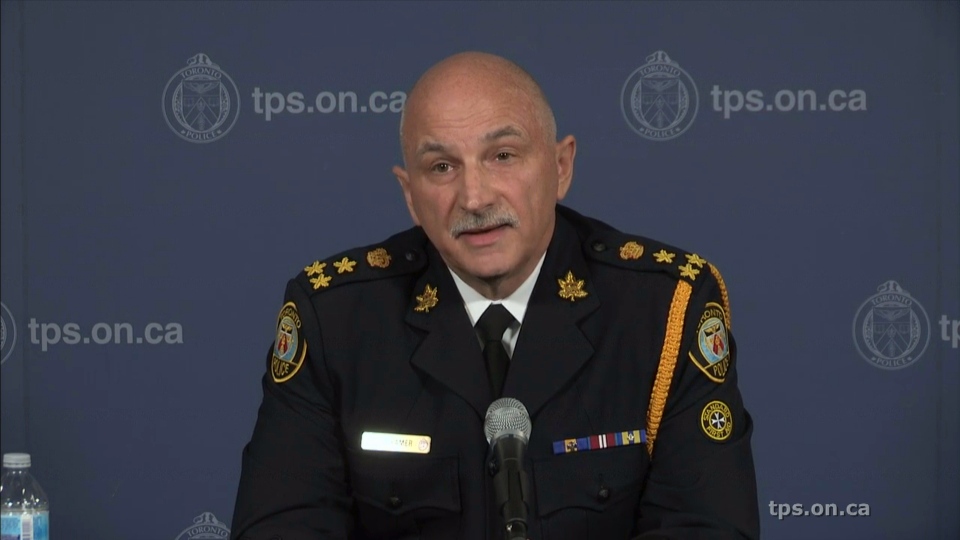 Ramer highlighted that on the night of May 27, multiple calls were made to 911 seeking assistance for a domestic disturbance involving an assault and the presence of weapons and that officers were dispatched and arrived in minutes.

However, Ramer said that the Toronto Police Service must now conduct its own review into this incident to help officers better respond “in this type of situation” in the future.

“I have been having discussions to have a mental health professional assist in this review. Our report will be submitted to the Toronto Police Services Board upon completion,” Ramer said.

He added that the service is also planning on expanding its Mobile Crisis Intervention Team (MCIT) Program, which partners a mental health nurse and a specially trained police officer to respond to situations involving individuals experiencing a mental health crisis.

“I think we tried our best on that day and we will examine everything we can to see if we can do better,” he said.

In June, the body that oversees the Toronto Police Service considered recommendations to immediately bolster mental health services and gather community input on the police budget in an effort to combat anti-Black racism within the force.

The suggestions were developed in the wake of the death of George Floyd, a Black Minneapolis man who died while a white cop pressed a knee to his neck for more than eight minutes, which was also referenced in Martino’s report.

Speaking to reporters following the release of the report, Korchinski-Paquet’s family said they are “totally disgusted” with the outcome and accused the SIU of omitting details relevant to the incident.

“We know that they’re hiding things,” Korchinski-Paquet sister Renee Korchinski said. “They’re not mentioning certain things that happened and that not right.”

The family’s lawyer echoed those claims while noting alleged discrepancies between the province’s autopsy and an autopsy commissioned by the family, specifically relating to the hyoid bone.

Singh explained that the bone in question is located at the base of the tongue and connected to the throat and is only damaged, in the majority of cases, when strangulation or hanging occurs. 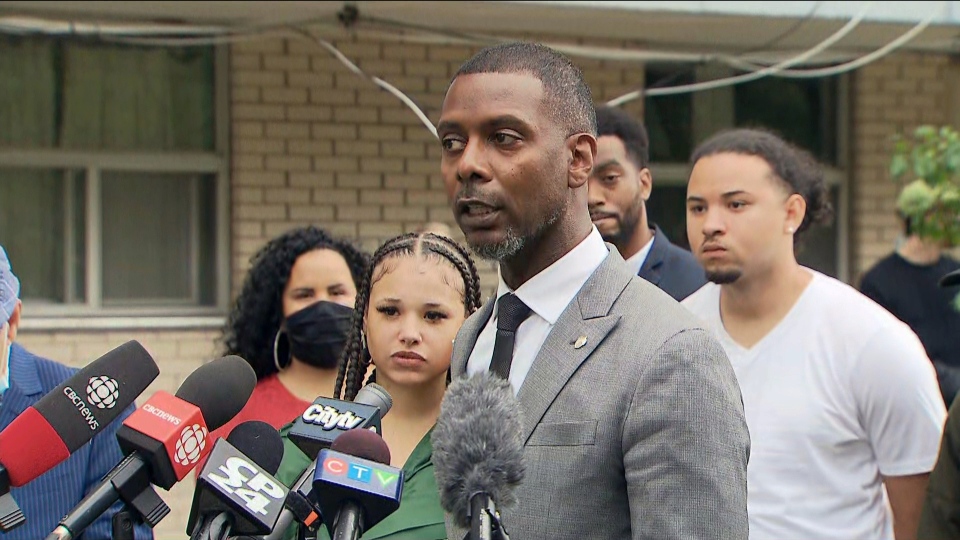 “That lack of clarity and detailed accuracy does cause concern for the accuracy of everything that has been placed before us,” Singh said.

As well, Singh said that even if the SIU report was taken at “face value,” the legal analysis “falls short.”

“Failure to provide the necessaries of life, it’s triggered by detention and clearly Regis was in detention in the hands of the police,” he said, adding that the second charge could be laid as a result of the duty of care on the police officers present.

“Permitting her to be anywhere near the balcony entrance was criminal negligence,” Morton said.

Morton added that Martino “totally misapplied the law” in his decision in terms of what the reasonable grounds are to lay those charges in connection with Korchinski-Paquet’s death.

Singh and Morton said that they will deliver their own interim report on the incident and the SIU ruling next week.