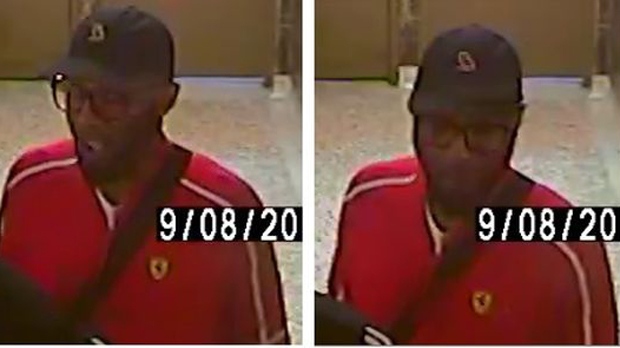 Homicide detectives are trying to identify a suspect believed to be involved in the death of Chad Day, who allegedly fell to his death from a Parkdale apartment balcony.

The 42-year-old was found lying in the driveway of apartment tower on West Lodge Avenue on the evening of Sept. 8.

It’s believed Day fell from the balcony after getting into some sort of altercation.

Police made two arrests in the case four days later.

On Thursday, police released a series of images taken from surveillance camera footage of a suspect in the case who has not yet been located or identified.

He has been described as being between 20 and 30 years old. He was last seen wearing a black baseball hat, a red sweater with white strips and pants.

Anyone who recognizes the person in the photos is being asked to call Toronto police or Crime Stoppers.