Investigators are attempting to locate a second vehicle after a hit-and-run crash in Scarborough on Wednesday morning left a 76-year-old woman dead.

At around 11:30 a.m., emergency officials were dispatched to reports of a collision in the area of Midland Avenue and Sheppard Avenue East.

At the time, a truck was travelling eastbound on Sheppard Avenue East before it went to make a right-hand turn to head southbound on Midland Avenue. Meanwhile, a female pedestrian was crossing Midland Avenue from the southwest corner of the intersection in the south crosswalk.

She was struck in the crosswalk and knocked to the ground, police said.

Responding paramedics said she was pronounced dead at the scene. 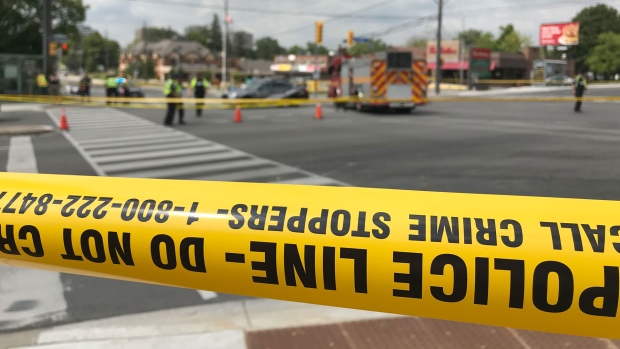 Police tape at the scene of a deadly crash in Scarborough on August 21, 2019 is seen. (CTV News Toronto / Scott Lightfoot)

Investigators allege that after the woman was struck, the driver of the truck continued along Midland Avenue.

Witnesses reported to police that a white car made the same turn onto Midland Avenue from Sheppard Avenue East a few minutes after the truck and also allegedly struck the woman, dragging her further south along the roadway.

The truck and its driver were located shortly after the deadly collision took place, officers said, but the second vehicle and its driver remain outstanding.

On Thursday, a security camera image of what police believe is the second vehicle was released. 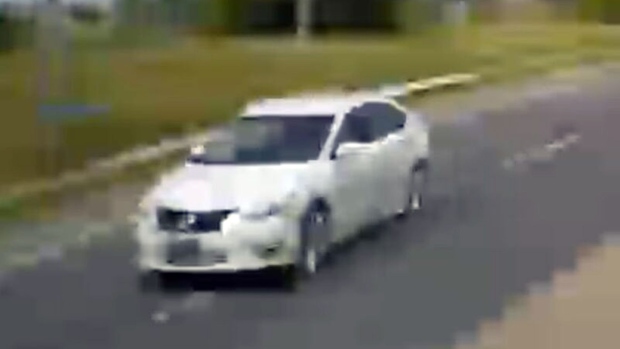 A white sedan police said they believe was involved in a deadly hit-and-run in Scarborough is seen. (Toronto Police Service)

“The main thing is that nothing good comes with the passing of time in a fail-to-remain crash so the message really is have a look around at the photo that we’ve released – if there are more, or better quality, we will release them as well – but, really the message is for that driver to do the right thing, come forward, speak to our investigators and clear this up,” Sgt. Brett Moore said on Thursday.

Moore said there are “a lot of factors” in play in this case and officers have “seen things like this before.”

“Something caused that driver to notice that they’ve struck something, to stop, to get out, but get back in the vehicle and leave and that’s the question that we need answered,” he said.

“At the very least the person is a witness and very likely there will be some evidence that we are going to want to collect in relation to the vehicle.”

No charges have been laid in connection with the incident thus far.

At the scene on Wednesday, Moore told reporters that victim services through Toronto police is readily available to anyone involved in the incident.

“People are not used to seeing these things, nor should they have to,” he said. 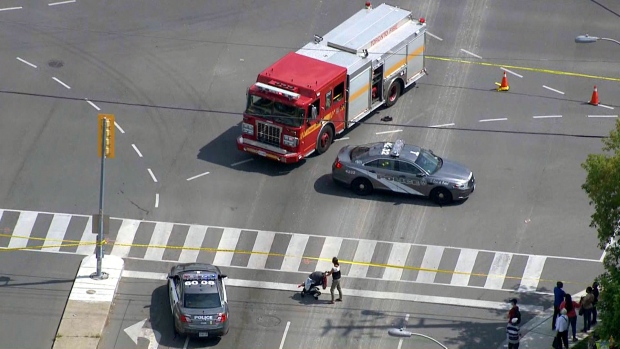 The scene of a deadly collision in Scarborough on August 21, 2019 is seen. (CTV News Toronto Chopper)

The investigation is ongoing and witnesses are also urged to come forward with any further information they may have in regards to the case.

“Police are asking local residents, businesses and drivers, who may have security or dash camera footage of the area or incident, to contact investigators,” police said.